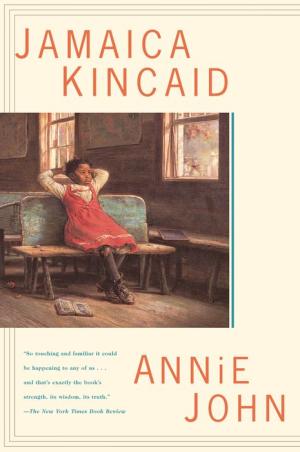 Annie John is a young, genius schoolgirl who wants to grow up to be just like her mother. Annie finds her mother beautiful – physically and internally – and her greatest wish is to stay forever with her, in their matching dresses, repeating their familiar daily routine of preparing dinner and washing clothes. They even share the same name: Annie. However, as young Annie starts to come of age, she is hit with the realization that she and her mother are not so similar after all.  When Annie points out a fabric to make a pair of dresses for them both, her mother replies, “You are getting too old for that . . . You just cannot go around the rest of your life looking like a little me.”

Annie’s world crumbles. As she advances to a new school, the differences between Annie and her mother become more apparent. Annie likes girls – especially those who don’t have to bathe and comb their hair every day like Annie is forced to. She likes to play marbles – even though her mother forbids it, since it isn’t ladylike. And Annie steals. To have what she wants, Annie is forced to steal things like trinkets, money, and marbles. She begins to resent her mother’s strict ways and desires her own, free existence.

When Annie falls ill for a long time, she is nursed back to health by her mother. After which, she leaves her family in Antigua behind to go to England to become a nurse, since she “would have chosen going off to live in a cavern and keeping house for seven unruly men rather than go on with [her] life as it stood.”

While Annie’s young teenage rebelliousness sounds familiar to many, she struggles deeply with the divide between the life she wants and the life her mother wants for her. Annie says, “In the year I turned fifteen, I felt more unhappy than I had ever imagined anyone could be. My unhappiness was something deep inside me, and when I closed my eyes, I could even see it . . . It took the shape of a small black ball, all wrapped up in cobwebs. I would look at it and look at it until I had burned the cobwebs away, and then I would see the ball was no bigger than a thimble, even though it weighed worlds.”

Annie John is not a difficult story to read in terms of language or length, but as a story it is tough to swallow since it is about growing up, which comes with the heavy realization that you must become your own being. Mostly, the story focuses on events from Annie’s life that are narrated rather than her depression and related illness. These topics are not discussed in detail, rather left open for the reader to think about.

Annie John is not told chronologically, which can be confusing at times. This story is historical fiction and showcases some of the culture of Antigua, an island in the Caribbean, whose native population has been impacted by colonization. This is most apparent in the strict gender norms emphasized by Annie’s mother and the teachings in Annie’s school. This story is wonderfully crafted. While these issues seem like major ones, they are carefully blended into Annie’s life so subtly that the reader can fully understand what it’s like to live as Annie John. The events of the story are personal to Annie’s life, however, the sadness that comes with growing older is universal. Because of that, this story is timeless and a must-read for those who seek to understand a genuine, flawed character, as she escapes from her restrictive past and sails to a new future.