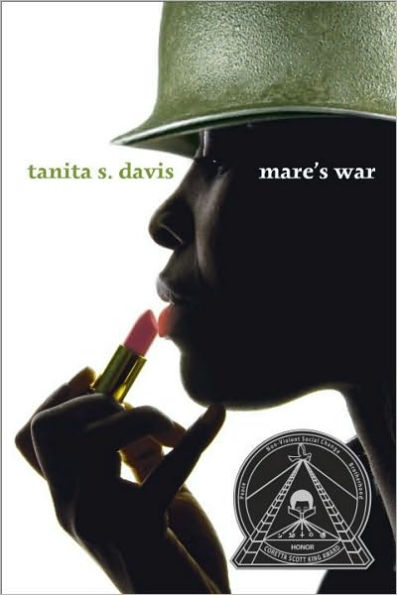 Mare’s War is a Coretta Scott King Award honoree and a tale of family, history, and resistance. Told in alternating “then” and “now” perspectives, the book follows Mare’s time in the Women’s Army Corps during World War II and as well as a road trip she takes back home to Bay Slough, Louisiana with her grandchildren in the present day.

The “now” sections are told from the perspective of Octavia, who is 15 and struggling to learn how to drive and fit in as a teenager. She tells about her conflicts with her older sister, Talitha.  Both sisters’ perspectives are given through postcards they write home to their mom and friends. Octavia does come to appreciate Talitha, at one point saying, “I’m actually kind of proud of my evil sister.”  Talitha is nearing her 18th birthday, and (through Octavia’s eyes) the readers see her struggles with boys, friendships, and growing up. Both sisters are reluctant to go on this road trip with their grandmother, thinking it will be boring, but the trip eventually brings the three women together, all with a greater appreciation for each other and their stories.

The “then” sections are told from Mare’s perspective. The story follows her from basic training all the way to Birmingham, England, and Paris, France. After an incident with Toby, a man her mother is involved with, Mare lies about her age to join the Women’s Army Corps. While she worries about her younger sister Josephine, Mare finds freedom and agency through her time in the army. She is relegated to some unsavory jobs as a member of a Black women’s unit.  In addition, Mare compares the discrimination she faces in the Southern U.S. to what she experiences in the military. When she returns home to Bay Slough, she sees how much has changed.

Mare’s War includes themes of family, growing up, and the importance of history. These themes teach readers to understand Talitha, Octavia, and Mare as they learn from each other. The reader sees the various forms of discrimination Black women experience at all ages, from the 1940s to the present day.

Mare’s War is an engaging story and one of the few books that address Black women’s role in World War II. However, the difficult scenes with Mare and Toby may upset younger readers even though these scenes are sexually charged, but not explicit. Mare’s sections use a form of African American Vernacular English, which could be confusing to readers who are unfamiliar with the dialect. At times, the easy-to-follow plot is slow. However, the characters make the story interesting and worth reading.