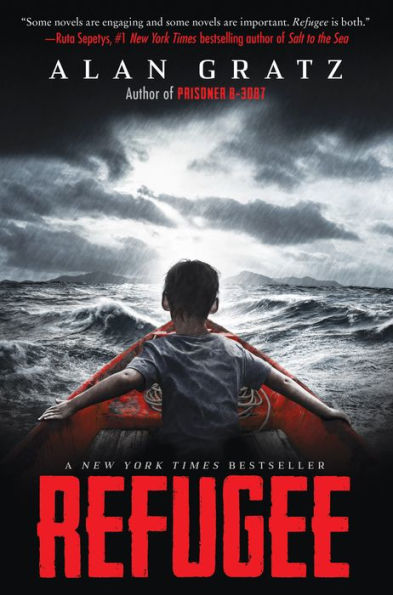 “In many ways, his father had never really come back from the concentration camp. Not the father Josef knew and remembered. Not the father he loved. He had come back in body, but not in spirit.”       —Refugee

Three kids. Three different time periods. Three refugee families flee their countries. Each family faces unimaginable dangers. But they have no choice but to press on and hope for a better tomorrow. Although decades separate them, they discover that they are all connected in the end.

Joseph is a Jewish boy living in 1930’s Nazi Germany. His family boards a ship set for Cuba. They hope to avoid the concentration camps and certain death. But will a country on the other side of the world take them in, or will they be sent away?

Isabel is a Cuban girl in 1994. Her family faces hunger, violence, and an uncertain future. But when her father is threatened with jail, the family sets out on a homemade raft. They hope to make it to Miami. Can they make it to America and keep their family together?

Mahmoud is a Syrian boy in 2015. His country is being torn apart by war. Violence, death, and destruction are everyday occurrences. When his family’s neighborhood is destroyed by bombs, they head towards Europe. Can they safely make it to a country that welcomes refugees?

Refugee sheds light on the historical and political aspects of each time period. Readers will learn about Kristallnacht, The Night of the Broken Glass, as well as the history of how the war in Syria began with Assad bombing his own people. Isabel’s story also explains the U.S. policy of “Wet Foot, Dry Foot.” The end of the book has historical information as well as a section on what readers can do to help.

Each section of the story is told from a young person’s point of view. This gives the book a tragic feeling because none of the young people have any control over the events that lead to their need to flee. The harrowing story of each family does not shy away from the harsh realities of the time period. Each family has stories of cruelty, violence, and death, which are often described in graphic and frightening detail.

The goodness of random strangers is seldom. However, in Josef’s story, a Hitler Youth protects Joseph, and the captain and most of the crew of the ship treat the Jews with respect. The story shows how small deeds can make a huge impact. Even though the story shows the kindness of a few, cruelty and violence overshadow the kindness in the book.

As Mahmoud and his family try to escape the violence, he realizes that it was easy for people to forget about the refugees until “refugees did something they didn’t want them to do—when they tried to cross the border into their country, or slept on the front stoops of their shops, or jumped in front of their cars, or prayed on the decks of their ferries—that’s when people couldn’t ignore them any longer.” Mahmoud struggles with wanting to stay invisible but wondering if he needs to be visible. “If you were invisible, the bad people couldn’t hurt you, either. If you stayed invisible here, did everything you were supposed to, and never made waves, you would disappear from the eyes and minds of all the good people out there who could help you get your life back.”

The publisher recommends Refugee for readers as young as nine, but younger readers may be upset by the horrors of war and the tragic decisions the families must make in order to survive. Younger readers who are interested in World War II may want to begin with the books Lifeboat 12 or Resistance, which also tell compelling stories without the graphic violence.

Refugee is an engaging story that brings the suffering of refugees to light. The situations that the characters face are emotional, but the characters could be better developed. Since each chapter focuses on a different family, the story was often disjointed. Some readers may have a difficult time following a story that changes characters every chapter. The book shows the reasons the family left but doesn’t mention the difficulties that countries face when dealing with thousands of refugees coming into their country.

Although the story is easy to read, the book’s emotional impact is hard-hitting. Refugee takes the reader on a harrowing journey where each family must deal with a tragic loss of life and cruelty from others. Refugee shows how families have been impacted in past and current times. The story gives voice to the current refugee crises and shows the desperation of people who want to live without fear of death.

“In many ways, his father had never really come back from the concentration camp. Not the father Josef knew and remembered. Not the father he loved. He had come back in body, but not in spirit.”       —Refugee