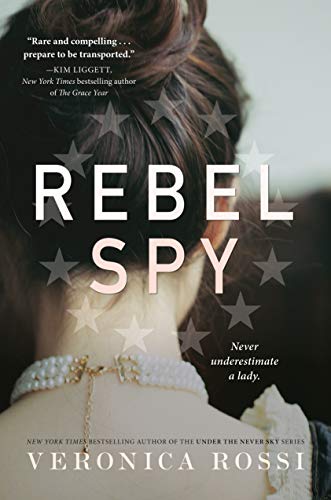 “‘Loyalty isn’t fealty. Nor is it duty. It can’t be demanded or coerced. It must be given freely, like love.’ Asa brought a hand to his heart. ‘As a tyrant who has denied us God-given rights, who had abused, attacked, and killed his own subjects, King George is responsible for the loss of my loyalty—and that of many, many others.’” –Rebel Spy

Rebellious Frannie Tasker knows little about the war between England and its thirteen colonies until a shipwreck off her home in Grand Bahama Island presents an unthinkable opportunity. The body of a young woman floating in the sea gives Frannie the chance to escape her brutal stepfather—and she takes it.

Assuming the identity of the drowned Emmeline Coates, Frannie is rescued by a British merchant ship and sails with the crew to New York. For the next three years, Frannie lives a lie as Miss Coates, swept up in a courtship by a dashing British lieutenant. But after witnessing the darker side of the war, she realizes that her position gives her power. Soon she’s eavesdropping on British officers, risking everything to pass information on to George Washington’s Culper spy ring as agent 355. Frannie believes in the fight for American liberty—but what will it cost her? Inspired by the true “355,” Rebel Spy is rich in historical detail and intrigue.

Rebel Spy was inspired by the true “355,” who was part of the Culper spy ring. However, 355’s identity has never been discovered, and Frannie is completely fictional. Frannie is a complex character whose stepfather, Sewel, is a tyrant. In order to escape Sewel’s abuse, Frannie makes a desperate move and assumes a dead woman’s identity. While on a ship sailing to New York, Frannie witnesses the British soldiers’ savage nature. These events lead Frannie to believe that “tyranny was wrong. Abuse was wrong. And power ought never be misused.” Frannie struggles between her desire to live a comfortable life as a lady and her belief that no one should be forced to live under a tyrant’s rule.

As the events of the war unfold, readers will learn how the war affected the entire world, not just the colonies. Because Frannie is living the life of a Loyalist, she becomes friends with many people who believe the Rebels deserve their fate. While the cruelties of war are not glossed over, many of the Loyalists and British soldiers were good people fighting for what they believed was right. However, Frannie helps the Rebel cause because she is convinced that, “Access to life, liberty, and happiness should be equal to all. We should all have a say in deciding our own fates.” Even so, Frannie points out that women will not have this ability even if the Rebels win the war. Instead, they are controlled by their fathers or husbands.

While Frannie’s story is interesting, she is slightly self-absorbed and doesn’t think about how her actions will impact others. For example, Frannie allows Duncan, a British officer, to court her and she has every intention of marrying him. Frannie claims to care for Duncan, but she often spies on Duncan and relays important information to the Rebels. Frannie never considers how her actions will affect Duncan. Since Frannie’s life is full of lies and deceit, she does not always come across as a sympathetic character.

Full of danger, suspense, and interesting facts about the Revolutionary War, Rebel Spy will please readers who enjoy historical fiction. While Frannie is not necessarily a relatable character, readers will empathize with her struggle as a young woman living in colonial America. From Frannie’s experiences, readers will learn that “reading will strengthen your expression. Words have power. Learn them and that power becomes yours.” To learn more about how women played a pivotal role in the Revolutionary War, check out Susanna’s Midnight Ride by Libby Carty McNamee.

“‘Loyalty isn’t fealty. Nor is it duty. It can’t be demanded or coerced. It must be given freely, like love.’ Asa brought a hand to his heart. ‘As a tyrant who has denied us God-given rights, who had abused, attacked, and killed his own subjects, King George is responsible for the loss of my loyalty—and that of many, many others.’” –Rebel Spy