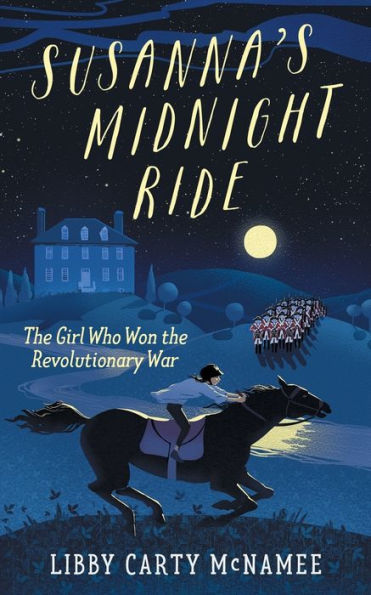 “No matter how terrified I am, it’s time to stand on my own,” Susanna Bolling. –Susanna’s Midnight Ride

Sixteen-year-old Susanna Bolling is struggling to cope with the realities of the American Revolution. She, along with her mother, are the sole residents and operators of their tobacco plantation (and the slaves who work it). Following the death of Susanna’s father and her older brothers’ entry into the American army, Susanna and her mother rely on each other for emotional support and companionship.

Susanna and her mother act as each other’s rock as they are tasked with running a plantation and supporting themselves. Susanna eventually braves the dangers associated with espionage and courageously sneaks into the woods. Alone in the middle of the night, Susanne goes to warn the American Army and General Lafayette of British movements and plans. She braves miles of deep forest riddled with dangerous branches and rattlesnakes. She reaches the American camp and meets with the general but gets desperately lost on the way back home. Is there any way Susanna will be able to sneak back home unnoticed? Will she be captured by the British soldiers?

Susanna’s Midnight Ride is engaging because the reader is encouraged to relate to Susanna and put themselves in her shoes. The reader is left to wonder if they would have the strength to support their mother in a time of crisis or the courage to risk everything to do the right thing. The author characterizes Susanna in a likable and relatable way, so that the readers are empowered to believe that courageous acts are possible for anyone with dedication and loyalty. Susanna’s story shows that fear does not determine if someone is a hero or a coward. Susanna is absolutely terrified to go on her journey but is so determined to help the American cause that she goes into the night regardless.

Susanna’s Midnight Ride is based on historical fact, with a few embellishments, exclusions, and adjustments to make this story suitable for a younger audience. The characters and plot are well developed and highly relatable, and the short chapters will encourage reluctant readers. McNamee creates an engaging story; however, some sections will challenge growing readers. For example, some of the phrases used by General Lafayette are in French, and the reader must use context clues to fully understand his meaning.

The negative representation of slaves on the Bolling plantation may upset readers. An older slave shouts and berates a younger slave for desiring freedom and states, “If I got to be a slave and mu children got to be slaves, I want to be their slave!” This storyline ends as over time the younger slave returns to the Bolling Plantation happily, saying that, “I done made a big mistake leaving the plantation.”

Susanna’s experiences highlight the importance of determination and loyalty. McNamee utilizes a real person’s story to realistically illustrate these lessons. Susanna’s Midnight Ride is a suspenseful and highly engaging story that will encourage readers to learn more about history and be confident when making difficult choices.

“No matter how terrified I am, it’s time to stand on my own,” Susanna Bolling. –Susanna’s Midnight Ride