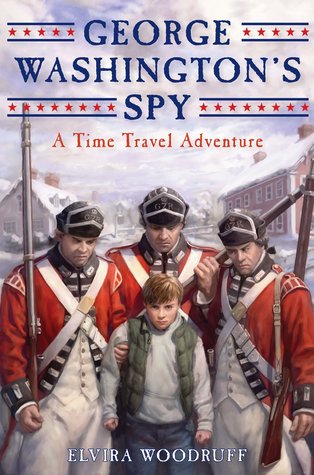 Other books by Elvira Woodruff

“A word of advice my young friend. He that can have patience can have what he will,” Dr. Franklin. –George Washington’s Spies

Ten-year-old Matt Carlton and six friends are accidentally swept back in time—to Boston in 1776! The British now occupy the city, and Redcoat guards are everywhere! While the boys are being held captive by a den of Patriot spies, the girls have been taken in by a wealthy Tory family.

The pox is rampant; danger lies around every corner—and there’s no hope for returning home to their own time. How will these seven children survive?

Even though Matt and his friends agree with the Patriot’s efforts to rid America of the British soldiers, the story is not one-sided. The girls who traveled back in time are cared for by a Tory family, who show them kindness. The girls wonder how someone who is loyal to the king can be a good person. Master Hewson, who supports the king, explains his motivation, “In the end, I find I can only be true to my beliefs. I have to provide for my family—and my love for them is what guides me.”

The theme is explored in more detail when Matt wonders how Master Hewson, who is a Loyalist and the enemy, can have a good heart. When an angry mob grabs one of the girls, Master Hewson gives himself up to save the girl. While talking about the family, a girl says, “The Hewsons were born in America. They just chose to stay loyal to their king. Isn’t loyalty supposed to be a good thing?” This encourages readers to think about how the revolution affected both the Loyalists and the Patriots.

George Washington’s Spies is a fast-paced, suspenseful story that brings history to life. However, the story takes a grimmer look at the war than the first book in the series, George Washington’s Socks. The brutal deaths are described in more detail and may upset sensitive readers. Even though the Battle of Dorchester was a milestone in American’s freedom, the book does not glorify the war. A Patriot spy, Moses, tells Matt, “There is nothing nice about war. It feeds on lies and treachery. It is about killing or being killed.”

Along their journey, Matt and his friends meet a variety of people on both sides of the war. Plus, they meet Benjamin Franklin. While Dr. Franklin’s appearance is brief, he adds some much-needed humor. History loving readers will learn interesting facts about the Battle of Dorchester, the medical practices of the time, and how the war affected both the Loyalists and the Patriots. The entertaining story will keep readers at the edge of their seats, and while the humor is minimal, there are several parts of the story that will leave the reader grinning. Plus, the author’s note includes five pages of additional historical information including information about the Loyalists, women who played a role in the revolution, and the use of leeches in medicine. More advanced readers who want to learn more about the Revolutionary War should also read Susanna’s Midnight Ride by Libby Carty McNamee.

Other books by Elvira Woodruff

“A word of advice my young friend. He that can have patience can have what he will,” Dr. Franklin. –George Washington’s Spies