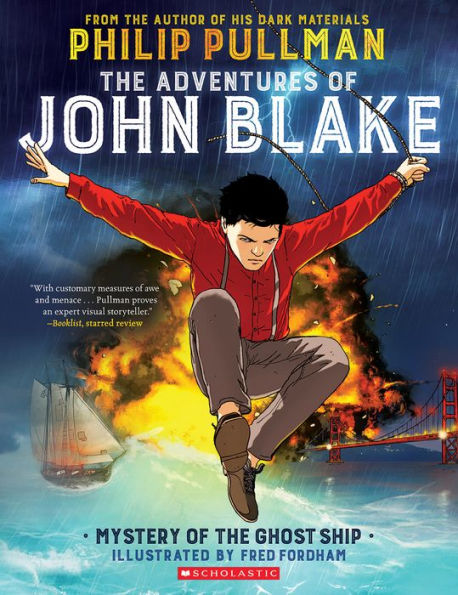 “I signed up for corporate green not missiles, world domination, and mass murder,” Bill Wilson. –The Adventures of John Blake: Mysteries of the Ghost Ship

The Adventures of John Blake: Mysteries of the Ghost Ship

Trapped in the mists of time by a terrible research experiment gone wrong, John Blake and his mysterious ship are doomed to sail between the centuries, searching for a way home. In the modern day, John rescues a shipwrecked young girl his own age, Serena, and promises to help her.

But returning Serena to her own time means traveling to the one place where the ship is in most danger of destruction. Plus the all-powerful Dahlberg Corporation has an ambitious leader with plans far greater and more terrible than anyone has realized. The Dahlberb Corporation is hot on their trail, because only John, Serena, and the crew know Dahlberg’s true intentions. And only they have the power to stop him from bending the world to his will.

John Blake is an interesting character who is brave enough to try to stop Dahlberg from controlling the world. However, John and his crewmates are not well developed. The end of the book has a snippet of backstory for each of the crew. However, none of their backstories is discussed in the graphic novel, which makes the characters one-dimensional.

The large cast of characters causes a lot of confusion, and at first, it’s hard to distinguish the good guys from the bad guys. For instance, the introduction of Danielle is confusing. She has been researching the ghost ship Mary Alice, but her interest in the ghost ship isn’t explained until the very end. Plus, it’s unclear why Danielle’s knowledge of the ship is a threat to Dahlberg. Unfortunately, none of the secondary characters are developed enough to understand their motivations or care about their outcomes.

While the publisher recommends Mysteries of the Ghost Ship for readers as young as eight, the graphic novel is not a children’s book. The great lengths Dahlberg takes to rid anyone who he perceives as a threat leads to a lot of violence. Plus, the profanity and dialogue are geared more towards adults than children. Even though the two main characters, John and Serena, are in their teens, younger readers will have a difficult time connecting to them.

Mysteries of the Ghost Ship uses language that makes the book accessible to readers, but some pages are text-heavy and the complicated plot is confusing. The illustrations help propel the story forward, while the spooky nature of the Mary Alice’s illustrations adds a little mystery.

Even though the Mary Alice is a time-traveling ship, the book’s action is almost entirely in the present day. If you want an action-packed graphic novel that is a quick read, Mysteries of the Ghost Ship is a good choice. However, readers who want more developed characters who jump into a particular time period should add Tangled in Time by Kathryn Lasky and the Ruby Red Trilogy by Kerstin Gier to their reading list.

“I signed up for corporate green not missiles, world domination, and mass murder,” Bill Wilson. –The Adventures of John Blake: Mysteries of the Ghost Ship