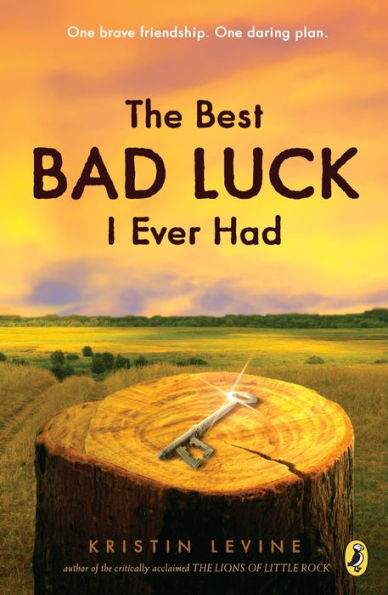 “An Indian, a Negra and a white boy sitting down to share some chicken and an apple pie. Sounds like a pretty good Thanksgiving to me,” Jim Dang-It. –The Best Bad Luck I Ever Had

Dit’s mother has a rule. “We didn’t have to like anyone, but we had to be nice to everyone.” Dit’s mother orders him to show Emma around. At first, Dit doesn’t like Emma. She doesn’t play baseball, fish, or climb. She’s smart and talks properly. But Emma is also the first person to ever listen to Dit, and in a house with ten children, that’s important.

Emma forces Dit to think about the difference between the colored kids and the white kids. Then when the town barber, Doc Hadley, is accused of murder and sentenced to be hanged, Dit is faced with an ugly truth. A white man’s word will always be believed, even if it is not true. Dit and Emma know Doc Hadley doesn’t deserve to be punished, so they come up with a daring plan to save Doc from the unthinkable. But if they are caught, the consequences could be disastrous.

Set in 1917 in Moundville, Alabama, and inspired by the author’s family history, The Best Bad Luck I Ever Had takes a look at race relations. The story is told through Dit’s perspective, which allows the reader to see Dit’s personal growth as he comes to understand the inequalities between blacks and whites. Because of Dit’s growing friendship with Emma, he is targeted by bullying. Soon, Dit is faced with a terrible decision—doing what is right or closing his eyes to injustice.

While the story is full of interesting characters, Dit is the only character who is well-developed. Even though the friendship between Dit and Emma is wonderful, a hint of romance at the end is far-fetched. Much like To Kill A Mockingbird, a man is unjustly sentenced to hang. However, this subplot was not fully explored, limiting the emotional impact of the story. Even though Dit is a compelling narrator, the story has several scenes that do nothing to advance the plot but instead make the story drag.

The Best Bad Luck I Ever Had explores the time period between the end of slavery and the beginning of the civil rights movement. The main lesson that readers will take away is, “Some things are worth fighting for. . . You want to do something for this town? Next time you see an injustice, take a stand. It’s worth the risk.”

This coming-of-age journey allows readers to learn positive lessons about social justice, making mistakes, and friendship. While many of the events in the story are predictable, teens will enjoy the surprising conclusion. Unlike Levine’s book The Lions of Little Rock, The Best Bad Luck I Ever Had doesn’t have much of an emotional impact. The Best Bad Luck I Ever Had imparts important life lessons, but the slow pacing will make it hard for some readers to stay engaged. Readers who want to explore racial relations during the 1900s should read To Kill a Mockingbird by Harper Lee. I’m Not Dying with You Tonight by Kimberly Jones & Gilly Segal also explores racial inequality, and how it still exists today.

“An Indian, a Negra and a white boy sitting down to share some chicken and an apple pie. Sounds like a pretty good Thanksgiving to me,” Jim Dang-It. –The Best Bad Luck I Ever Had