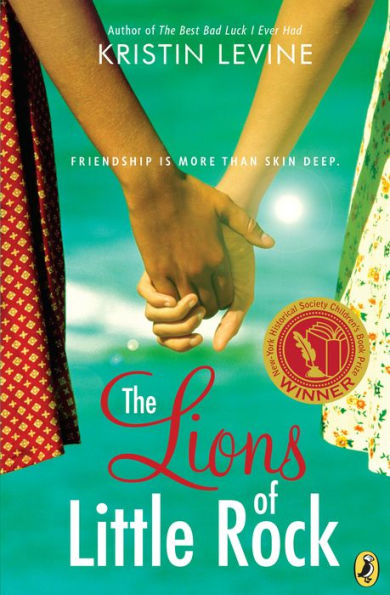 “I guess I’ve learned it’s not enough to just think things. You have to say them too. Because all the words in the world won’t do much good if they’re just rattling around in your head,” Marlee. –The Lions of Little Rock

The Lions of Little Rock

Twelve-year-old Marlee, who is shy and quiet, feels like her whole world is falling apart. And she’s sure that starting middle school is only going to make things worse until she meets Liz, the new girl. It may look as if they have nothing in common—Liz always knows the right thing to say, and Marlee can barely stand to speak up in class—but they become fast friends. Then, Liz is caught “passing” for white and leaves school without even a goodbye. Marlee decides she wants her friend back. But to stay friends, Marlee and Liz must be willing to take on segregation—and the dangers their friendship could bring to both families.

The Lions of Little Rock is historical fiction at its best. Not only is the story engaging, but it also sheds light on the struggle to desegregate schools in Little Rock Arkansas during the 1950s. The story focuses on Marlee and Liz, who refuse to give up their friendship just because they are of different races. Both girls help each other face their fears, and they encourage each other during difficult times. Through their interaction, Marlee comes to realize that, “A friend is someone who helps you change for the better. And whether you see them once a day or once a year, if it’s a true friend, it doesn’t matter.”

When someone finds out that Liz is passing as white, Marlee tries to understand her friend’s actions. Marlee’s family maid explains why passing as white is so dangerous. “If you’re really lucky, you lose your job or you’re kicked out of school. If you’re a little less lucky, you get beat up, but after a few weeks your injuries heal and you’re left alone. If you’re not lucky, a lynch mob comes and firebombs your house killing you and everyone you love.” Through Marlee and Liz as well as historical examples, the reader will come to understand racism.

Marlee changes from a timid girl who barely talks into a confident person who is willing to fight for what is right. Much of Marlee’s inspiration comes from the Little Rock Nine because they “believed they had a responsibility to make things better. Believed they could make things better, even though they were still just kids.” Marlee isn’t content to just watch the adults try to make a difference. Instead, despite her mother’s objections, Marlee joins the Woman’s Emergency Committee to Open Our Schools. As part of the organization, she helps fold pamphlets, talks to voters, and performs other small jobs that make a huge impact. In the end, Marlee learns the importance of standing up for herself and others.

The Lions of Little Rock won the New York Historical Society Children’s Book Prize. The entertaining story teaches important life lessons about friendship, facing fears, and finding your voice. The story is historically accurate; the author’s note at the end of the book explains which parts of the story were fictional and which events were factual. The book also includes three pages of discussion questions. Everyone should read The Lions of Little Rock because it will help readers understand racial tensions in the late 1950s as well as show the importance of making a difference in your world.

“I guess I’ve learned it’s not enough to just think things. You have to say them too. Because all the words in the world won’t do much good if they’re just rattling around in your head,” Marlee. –The Lions of Little Rock