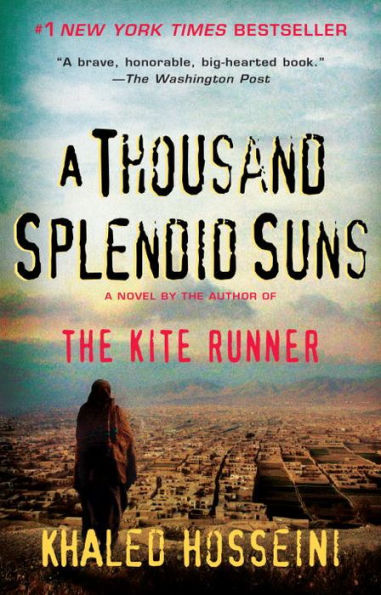 “Seasons had come and gone. . . But Mariam had hardly noticed, hardly cared. . . the future didn’t matter. And the past held only this wisdom: that love was a damaging mistake, and its accomplice, hope a treacherous illusion. –A Thousand Splendid Suns

A Thousand Splendid Suns is set against the volatile events of Afghanistan’s last thirty years—from the Soviet invasion to the reign of the Taliban to post-Taliban rebuilding. It puts the violence, fear, hope, and faith of the country in intimate, human terms. It is a tale of two generations brought jarringly together by the tragic sweep of war. In war, personal lives—the struggle to survive, raise a family, and find happiness—are inextricable from the history playing out around them.

Mariam and her mother live as outcasts. With little contact with the outside world, Mariam dreams of a time when her father will accept her. When Mariam’s mother dies, Mariam has no choice but to show up at her father’s house. Her father quickly arranges for Mariam to marry Rasheed. At first, Mariam is hopeful that living in a new city with a new husband will be the beginning of something good. But after a string of miscarriages, Rasheed becomes violent and forbids Mariam from seeking friendship.

Meanwhile, Laila grew up with parents that believe everyone deserves an education, including girls. While Laila’s childhood is far from perfect, she is surrounded by loving people. Then, just when her family plans to leave their war-torn city, Laila’s parents are killed. With no family or friends left, Laila isn’t sure where to turn. When Rasheed offers marriage, Laila reluctantly agrees to become his second wife. However, she wasn’t prepared for his first wife’s hate or Rasheed’s violence.

A Thousand Splendid Suns has worked its way onto many schools’ required reading lists because the story helps readers understand Afghan history. More importantly, it is a story of family, friendship, and hope. Mariam and Laila’s friendship gives them strength to live in a brutal environment, where their husband is cruel and abusive. Through their plight, readers will begin to understand the role women play in Afghanistan and how the Taliban changed their world overnight.

Readers will be deeply moved by the story’s events. However, the brutality of war, the massacre of innocent people, and the harsh physical abuse of both Mariam and Laila is graphic and disturbing. Hosseini paints a realistic picture of living in a war-torn country, and the images of death will remain with readers for a long time after they close the cover of the book. Even though A Thousand Splendid Suns has a positive message, sensitive readers will find the descriptions of Rasheed’s abusive behavior and the constant death upsetting.

Before you read A Thousand Splendid Suns, grab a box of tissues because the story will bring you to tears. Because of Laila’s friendship, Mariam makes a decision that will forever alter both of their lives. Through Mariam’s experiences, readers will come to understand how powerless women were under the Taliban’s rule, but they will also see how friendship and kindness have the power to change one’s life.

“Seasons had come and gone. . . But Mariam had hardly noticed, hardly cared. . . the future didn’t matter. And the past held only this wisdom: that love was a damaging mistake, and its accomplice, hope a treacherous illusion. –A Thousand Splendid Suns