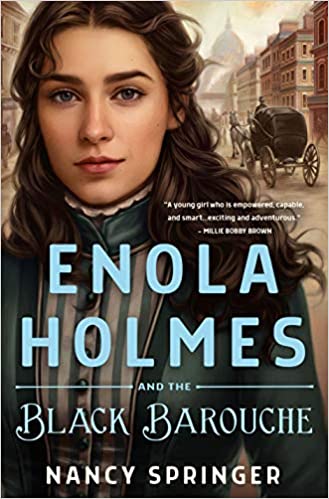 “It is only normal that one should wish to be oneself and not someone else. I feel the same way. Before I began to disguise myself as a grown-up, I was a quite shocking creature wearing Knickerbockers,” Enola. –Enola Holmes and the Black Barouche

Enola Holmes and the Black Barouche

Enola Holmes is the much younger sister of her more famous brothers, Sherlock and Mycroft. But she has all the wits, skills, and sleuthing inclinations of them both. At fifteen, she’s an independent young woman—after all, her name spelled backwards reads “alone”—and living on her own in London. When a young professional woman, Miss Letitia Glover, shows up on Sherlock’s doorstep desperate to learn more about the fate of her twin sister, it is Enola who steps up. It seems her sister, the former Felicity Glover, married the Earl of Dunhench and, per a curt note from the Earl, has died. But Letitia Glover is convinced this isn’t the truth, that she’d know—she’d feel—if her twin had died.

The Earl’s note is suspiciously vague and the death certificate is even more dubious, signed by a John H. Watson, M.D. (who denies any knowledge of such). The only way forward is for Enola to go undercover—or so Enola decides at the vehement objection of her brother. And she soon finds out that this is not the first of the Earl’s wives to die suddenly and vaguely—and that the secret to the fate of the missing Felicity is tied to a mysterious black barouche that arrived at the Earl’s home in the middle of the night. To uncover the secrets held tightly within the Earl’s hall, Enola is going to require help—from Sherlock, from the twin sister of the missing woman, and from an old friend, the young Viscount Tewkesbury, Marquess of Basilwether!

The interaction between Sherlock and Enola is humorous and although Enola usually doesn’t include Sherlock in her plans, he does acknowledge her ability to come up with a creative scheme to solve the mystery. Like Sherlock, Enola is a capable character who uses her mind to solve problems. To Sherlock’s dismay, Enola’s unconventional upbringing has allowed her to grow into a spunky, self-sufficient teen. Enola explains, “My mother saw to it that I was not taught to knit, crochet, embroider, or play the piano; she wanted to make quite sure that I would never become domestic or decorative.” Enola Holmes and the Black Barouche is an engaging mystery, and also explores women’s roles during the Victorian Era.

Springer excellently narrates the adventure with old fashion language, British colloquial language, as well as difficult vocabulary such as crepuscular, galvanization, and pulchritude. Despite this, most readers will be able to use context clues to understand unfamiliar words. The different types of language are part of the book’s charm and help distinguish different characters. For example, when Dr. Watson is worried about Sherlock’s behavior, he seeks out Enola. Dr. Watson tells her, “I exhorted him to shave and get dressed as a rudimentary step in exerting himself toward recovery, but to no avail.”

Enola Holmes and the Black Barouche takes readers on an action-packed adventure that is pure fun. Readers will fall in love with Enola, who is the story’s narrator. The unconventional character isn’t afraid to take risks, use stealth, or ask for the assistance of others. Even as Enola galivants through England, she takes the time to discuss her fashionable clothing which will delight fashion-conscious readers. Readers who want a delightful mystery should add Enola Holmes and the Black Barouche to their must-read list. More mature readers who enjoy historical mysteries should also read Glow by Megan Bryant.

“It is only normal that one should wish to be oneself and not someone else. I feel the same way. Before I began to disguise myself as a grown-up, I was a quite shocking creature wearing Knickerbockers,” Enola. –Enola Holmes and the Black Barouche