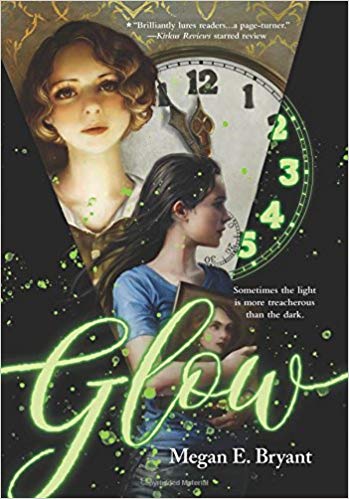 “If you do the wrong thing for the right reason, is it still wrong?” Lydia. —Glow

Julie’s future plans of going to New York for college have died. Julie is frustrated with her mother’s financial problems, a dead-end job, and a best friend who is moving on without her. When she discovers a series of antique paintings in a thrift store with hidden glowing images, her curiosity is piqued. As Julie looks for clues to the artist’s identity, she finds more paintings with increasingly nightmarish scenes hidden in the daylight.

Lydia’s story comes to life as she writes to her beloved who is on the front lines of the Great War. One hundred years before Julie’s time, Lydia is excited to join the girls in the factory painting luminous watch dials for soldiers. She is hoping that her factory job will help her struggling family, but when girls from the factory become seriously ill, Lydia wonders if there is danger lurking in the factory’s new scientific paint.

As Julie’s obsession with the paintings mounts, she discovers the truth about the Radium Girls. As she learns about the paintings, she also learns that relationships are more complicated than she thought. In the end, Julie realizes that when life’s obstacles destroy your plan, there can be a new path to finding your goal.

Megan E. Bryant tells a beautiful story of love, friendship, and broken dreams. Julie’s story is told in the first-person point of view, which allows her range of emotions to be highlighted. As Julie grieves the loss of her college dream, she also struggles with feelings of resentment towards her mother and envy over her best friend’s future. Teens will be able to relate to Julie’s frustration because life doesn’t always go as planned. However, in the end, Julie learns valuable lessons about the secrets that people keep.

Lydia’s story is told in letter format. Every other chapter of Glow focuses on Lydia’s life and concerns. The reader will learn about how life was for a young woman who lived during World War I. Lydia’s only wish is to have her soldier come home safely so they can be reunited. The unexpected ending of Lydia’s story is heartbreaking and will leave the reader in tears.

Glow captures the reader’s attention from the very beginning. The mystery of the paintings, as well as the captivating characters, make Glow a difficult book to put down. Although Glow is written for readers as young as 12, younger readers may be disturbed by the gruesome descriptions that are found hidden in the paintings. The story describes the horrific effects of radiation poisoning both in the paintings and in Lydia’s older sister’s slow death. Although there is very little sexual content, the story does show the shame of being diagnosed with syphilis during the early 1900s.

“If you do the wrong thing for the right reason, is it still wrong?” Lydia. —Glow