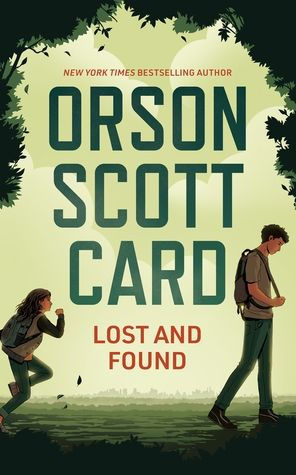 “You managed to turn calling me insane into a kind of compliment, I think,” Ezekeil. –Lost and Found

Fourteen-year-old Ezekiel Blast is an outcast. No one at his school talks to him. All of his classmates think he is a thief because no one understands his unique talent for finding things. It’s not a superpower—it’s a micropower. But Ezekiel’s micropower has done nothing helpful because when Ezekiel returns a lost item to its owner, the owner assumes he is the one who must have stolen it.

Everything changes after Ezekiel meet Beth. Beth believes his power might be useful. When the two friends are invited to join a group of other teens with micropowers, Ezekiel realizes he is not alone. With Beth’s encouragement, Ezekiel begins testing his micropower and trying to discover how it works.

When a police detective appears at Ezekiel’s house, desperate for any help that will lead to a missing little girl, Ezekiel is determined not to help him. He doesn’t understand his micropower and is afraid of the cops. But when tragedy strikes, Ezekiel knows that he must use his talent to find what matters most.

Ezekiel is a character that jumps off the page and grabs the reader’s attention. Lost and Found is told from Ezekiel’s point of view, which allows the reader to understand his fear, his hurt, and his unusual talent. Beth, a proportional dwarf, befriends Ezekiel and encourages him to join a support group for those who have unusual powers. The interesting premise and the unusual characters will keep the reader’s attention. However, towards the middle of the story it suddenly takes a disturbingly dark turn.

When Ezekiel decides to help find the missing girl, the police officer tells him of disturbing cases of young girls who have been taken, put on a pedophilia pornography website, and then are murdered on screen. When Ezekiel’s friend Beth is kidnapped, Ezekiel is truly motivated to use his micropower to find her. During this time, Ezekiel also wrestles with feelings for Beth. Because Beth is a proportional dwarf and looks like a child, he worries that his romantic feelings for Beth will make him look “like the kind of guy who likes little girls.”

Another disturbing plot twist is when Ezekiel learns that Beth’s mother had died, and Beth hid her mother’s death in order to avoid being put in a foster home. Lost and Found gives the reader insight into the nature of friendship, but the dark content of the book may give readers nightmares. Readers may find many of the facts unbelievable and the long passage of the support group sessions tiring. Fans of Orson Scott Card’s Ender’s Game will be disappointed that Lost and Found is disjointed, and while Ezekiel is a likable character, this story isn’t as expertly crafted as Ender’s Game.

“You managed to turn calling me insane into a kind of compliment, I think,” Ezekeil. –Lost and Found