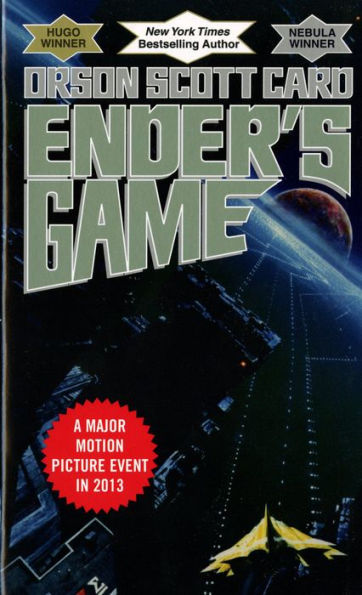 “I’ll lie to him.” “And if that doesn’t work?” “Then I’ll tell the truth. We’re allowed to do that in emergencies. We can’t plan for everything, you know,” Anonymous. –Ender’s Game

Earth has been attacked twice by the Buggers—aliens attempting to colonize Earth’s solar system. The whole world waits with bated breath for the Third Invasion and sends its best and brightest children to Battle School when they are six years old to be trained in strategy and warfare. Eventually, these children will become the pilots, commanders, and soldiers that will save the human race from extinction.

Ender is a governmentally approved Third child in a world with a strict two-child rule. He was allowed to be born in the hopes that he will be a genius like his two older siblings, but with the correct temperament for Battle School. The experiment succeeds, but Ender doesn’t want to go to Battle School. He doesn’t want to hurt anyone. He especially doesn’t want to leave behind his beloved sister Valentine, though he will not miss his psychopathic brother Peter. But Colonel Graff tells Ender that the world needs him, and Ender believes him.

What follows is Ender’s journey through Battle School, where his brilliance generates both respect and hatred from the other children. As the children study how to fight, Ender finds himself at the center of an immense web of manipulations, all designed to turn him into the Commander that Earth needs to defend itself. It doesn’t matter that Ender doesn’t want to kill anyone; it’s what he is good at and will become great at with the right push. And push him, they do.

Ender’s Game is a masterpiece, which is why it is required reading at many high schools. There is heavy content that is inappropriate for younger and sensitive readers: profanity and name-calling are used often, there are bouts of violence (including attempted murder), and there is a thematic question of whether cruel, immoral means are justified by an end that benefits humanity.

These masterfully woven questions will keep readers up at night, and readers will relate to Ender and his struggle to define himself. Is he a monster like his brother Peter? Is he a killer like the teachers want him to be? It is Ender’s emotional turmoil of self-loathing, loneliness, and despair that will haunt readers long after they read the last page—more than the aliens, the fights, and even the theological questions. Ender’s Game will leave readers desperately wishing that Ender’s life had not been so hard. Readers will forget that Ender is just an ink-and-paper boy from a story, and not the son, brother, or friend that they have fondly come to know him as.

“I’ll lie to him.” “And if that doesn’t work?” “Then I’ll tell the truth. We’re allowed to do that in emergencies. We can’t plan for everything, you know,” Anonymous. –Ender’s Game