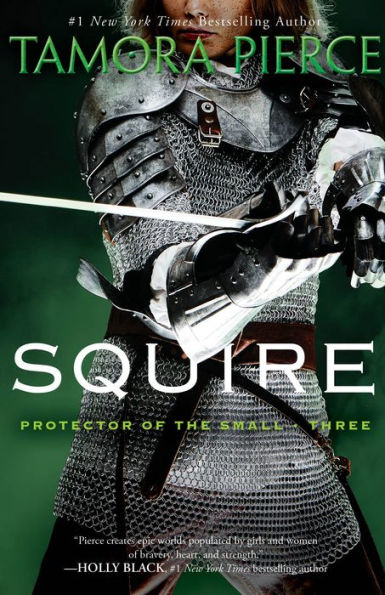 “This is your first challenge, my lady? Your first, and you won,” an attendant said. —Squire

Protector of the Small #3

It was Kel’s proudest moment when she passed her page examinations and was named a squire. But as months pass without any knight taking her onto their service, Kel worries that no knight will want a girl squire. Will she be stuck as a glorified scribe in the palace forever?

That is not her only worry. Now that she is a squire, the Chamber of the Ordeal weighs heavily on her mind. Every squire must enter the Chamber at the end of their squireship. If they survive, they become a knight. But some have been driven mad by the Chamber. Determined to prove herself unafraid, Kel visits the Chamber several times and places her hand on the outside of the door. And each time, the Chamber sends her horrifying nightmares built from her deepest fears.

But Kel cannot dwell on the Chamber too often, because her wildest dreams come true when Raoul asks her to be his squire. As the Knight Commander of the King’s Own, Raoul is a noble warrior that will take Kel on many adventures—not all of them enjoyable. He is a character that readers will fall in love with, as he is good and noble, but also great fun with a solid sense of humor.

Kel is a strong female character who grows and changes throughout the story. Kel has been able to succeed in a male-dominated world because of her hard work and determination. Kel stands up for other women, admires other women rather than becoming jealous, and her behavior highlights the importance of women supporting each other. Kel has a strong moral code that will encourage readers to also stand up for others.

Although Kel is a strong woman, she also has a supportive family and friends. These relationships give the story more depth and show the importance of having positive relationships. As Kel becomes older and begins to think about romantic relationships, Kel discusses sex with her mother, which helps the reader understand Tortall’s sexual morals. Even though Raoul felt uncomfortable talking about sex with Kel, they have a conversation about how it might affect her career, and he gives her advice and information to help Kel make the decision that is right for her. Although Kel never has a sexual relationship, Kel does obtain birth control. Having a sexual relationship is discussed in a nonjudgmental way that allows Kel to make the best decision for herself.

Squire does not disappoint, with an exciting plot full of monsters, magic, and fun. Raoul and the men of the King’s Own add well-developed new characters to the mix, while Kel’s page friends still make appearances. Readers will feel as though they are squires as they follow Kel on her jousts and into battle. As Kel explores being in a relationship for the first time, readers will relate to her doubts and awkwardness. With a tantalizing ending that sets up the next book, readers should be sure to have Knight handy, because they will not want to wait to read the final book in the Protector of the Small series.

“This is your first challenge, my lady? Your first, and you won,” an attendant said. —Squire