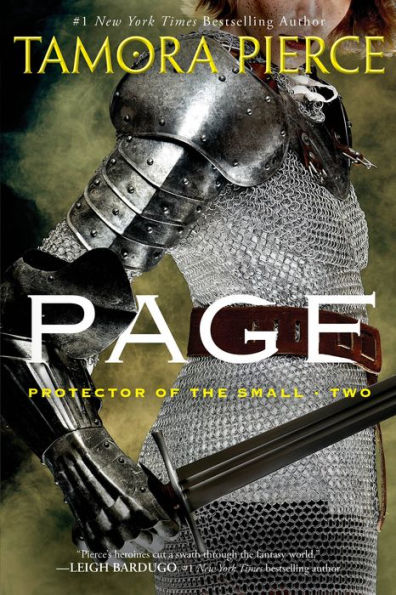 Protector of the Small #2

Kel survived her first year as a page, but her training is only increasing as she gets older. She still has her studies and combat training, riding, and etiquette lessons. But now that Lord Wyldon has discovered her fear of heights, he constantly gives her tasks that test her limits—such as climbing to the top of the palace wall and mapping the lands beyond. To her friends, Kel insists that Lord Wyldon is just training her to be a better knight, but secretly she wonders if he is trying to drive her to quit.

Meanwhile, Joren claims he wants to turn over a new leaf and be friends. Kel outwardly agrees, but worries Joren is merely becoming craftier. Still, she has little time to worry about what Joren and his friends are up to because she is horrified to discover that she is becoming a woman. First, her breasts begin to grow, and then she starts her monthlies. While Kel wants things to stay exactly how they were, at least one of her friends has begun to notice that Kel is a girl…

Page is a strong follow-up to the first Protector of the Small novel. The same enjoyable cast remains, with the interesting addition of new characters such as Kel’s maid Lalasa. Similar to the first book, Kel has to prove herself capable despite her perceived “weakness” of being a girl. One obstacle that Kel must overcome is her deep fear of heights. Even though she does not want to confront her fears, she proves that she has the strength to pursue her dream. As Kel progresses through her training, Page continues with the theme of behaving honorably, as a true knight should.

Readers will enjoy the advancement of Kel’s training and watching as her relationships with her friends grow and change. Kel’s maid Lalasa is a well-developed character that grows throughout the story. At first, Lalasa is timid because she has suffered great abuse from men. However, while she is in Kel’s service, Lalasa develops confidence and flourishes into a capable young lady. This story highlights the importance of friendship as well as the importance of perusing one’s dreams.

While this book covers the span of three years, where the first book covered only the span of one, the story does not feel rushed or lacking. Kel is a unique heroine who must fight against her own fears as well as discrimination. Both male and female readers will be drawn to Kel’s world and will come away with a positive message—with hard work and determination, dreams can come true.