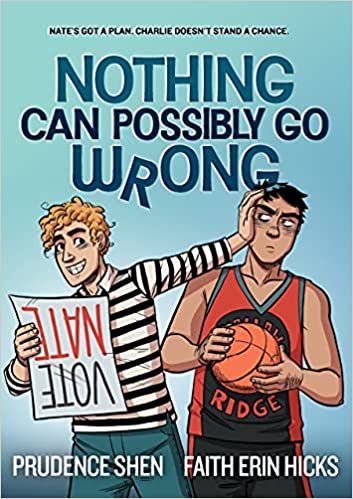 “Holly, if you kill him, your dad is definitely going to take your car away,” a cheerleader said. –Nothing Can Possibly Go Wrong

Charlie is the laid-back captain of the basketball team. Nate is the neurotic, scheming president of the robotics club. The two have been best friends their whole lives until Nate declares war on the cheerleaders and the cheerleaders retaliate by forcing Charlie to run against Nate in the class election. What’s at stake? Student funding which, depending on who wins, will either cover a robotics competition or new cheerleading uniforms.

Bad sportsmanship? Sure. Chainsaws? Why not? Running away from home on Thanksgiving to illicitly enter a televised robot deathmatch? Let’s do this!

The drama of high school comes to life in this hilarious graphic novel that focuses on two friends. Readers will love the interplay between Nate and the cheerleaders as they go head to head trying to best each other. The ridiculous student body campaign, the high school drama, and the crazy antics of Nate and Charlie will have readers laughing out loud. At first the characters argue or fight, but Nate’s experiences will ultimately teach the importance of working together, even when people dislike each other.

While a lot of the story’s action comes from humorous situations, Charlie also deals with some difficult family dynamics. His father travels for work, leaving Charlie alone most of the time. Charlie also has a hard time dealing with the trauma of his mother leaving town to live with another man. While this conflict is not developed in detail, Charlie does learn that he cannot ignore the situation and instead must talk to his parents about his emotions.

Nothing Can Possibly Go Wrong is a quick read and a fun graphic novel. Each page’s panels have zero to seven sentences that often contain onomatopoeia and interesting banter. A lot of illustrations show characters’ facial expressions; some facial expressions are over the top, but this adds to the humor and makes it easy for readers to understand the characters’ feelings.

Nothing Can Possibly Go Wrong focuses on high school drama and uses the typical stereotypes—mean cheerleaders, nerdy robot builders, and a basketball star—to create humor and keep the action moving. To increase the tension, the teens generally behave badly. For instance, one cheerleader uses her parent’s credit card without permission so the kids can sneak off to a battle bot competition. These episodes will appeal to a wide range of teenagers, who will enjoy watching Nate deal with the pressures of high school cliques. Nothing Can Possibly Go Wrong will grab readers right from the start and keep them smiling as they experience Charlie’s crazy high school drama.

“Holly, if you kill him, your dad is definitely going to take your car away,” a cheerleader said. –Nothing Can Possibly Go Wrong