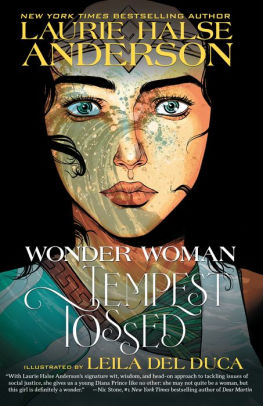 “When the rules are wrong, you have to break them. Especially when little ones are in trouble,” Diana. –Wonder Woman: Tempest Tossed

Wonder Woman: Tempest Tossed follows Diana of Themyscira (AKA Wonder Woman), a sixteen-year-old who leaves her home island and learns about the modern world. Diana is the only child on her island, which is full of powerful, immortal Amazon women. With no one to share in her experiences, Diana has often felt lonely and confused while going through puberty. Even so, she lives an enjoyable life. The Amazons are happy and ensure that everyone is well-fed and cared for.

When boats full of refugees wash up on the shores of Themyscira, the Amazon women chase them off in order to protect their border. Diana, though, is determined to see the refugees to safety and accompanies them off the island and into the mortal world.

They land in a refugee camp in the Middle East, where Diana sees war, poverty, sickness, and cruelty. Her ability to understand and translate every human language soon catches the attention of UN ambassadors, who give her a visa to the United States. Diana soon finds herself living with Polish immigrant Henke and Henke’s granddaughter Raissa in the Queens borough of New York City.

Diana becomes passionate about helping the children of her new community. As a headstrong and compassionate warrior, Diana finds herself at odds with the forces of injustice and hatred. She must stand up for the truth and justice that she was raised to believe in. While fighting for the rights of immigrants, she finds a new family and home in the mortal world.

With skillful writing and drawing, Laurie Halse Anderson and Leila Del Luca have brought a new and original story to the Wonder Woman character. The full-color illustrations are detailed and visually engaging, with a diverse array of panel layouts for effective visual storytelling. While comics fans will recognize the characters of Diana and the Amazons, this story can be read independently of any other Wonder Woman comic book. Diana’s position as an idealistic fish-out-of-water lets readers gain a fresh, heartbreaking perspective on the injustices of war, poverty, homelessness, and even human trafficking. At the same time, Diana discovers the joys of caring for children, connecting with other teenagers, and partaking in modern culture. Diana encounters food trucks, regional slang, polka dancing, subway transit, and parkour with wide-eyed enthusiasm readers will find endearing.

The story culminates in an exciting fight where Diana uses her superhuman strength to rescue children from a rich and powerful villain. It’s satisfying to see a real-life “bad guy” vanquished so quickly and easily by Diana. Even so, the story will leave readers with the knowledge that change is not always easy, and that the human rights abuses (like poverty and human trafficking) portrayed in this piece of fiction have real-life parallels which are not so easily brought down. The story is political in nature, with a stance that mature readers will recognize as being pro-immigration. The message is optimistic and idealistic, but still emotionally compelling. It makes for an uplifting story that will interest not only superhero fans but also for casual readers who want to read about social justice in the modern world.

“When the rules are wrong, you have to break them. Especially when little ones are in trouble,” Diana. –Wonder Woman: Tempest Tossed