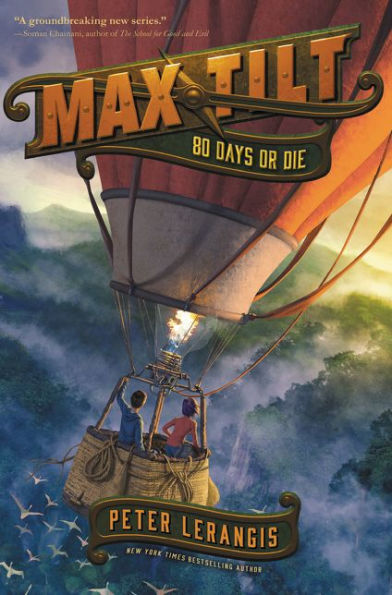 Jules Verne’s left behind an unpublished manuscript, The Lost Treasure. When Max and his cousin, Alex, follow the clues and end up rich, they think all of their problems are solved. But when Max’s friend becomes gravely ill and Max’s mother’s illness returns, Max and his cousin take a deeper look into Verne’s history.

They discover that Verne miraculously recovered from a near-fatal gunshot wound. The Lost Treasure hints that Verne discovered magical healing elements that allowed him to recover from his wounds. Using clues from Around the World in 80 days, Max and Alex set out on a daring adventure to learn more of Verne’s secrets and heal Max’s mom and friend.

80 Days or Die begins with fun riddles that readers will enjoy trying to figure out. When Max and Alex head out on their journey, they meet several new people who they bring on their trip. Although Max seems fascinated by facts, he doesn’t take the time to do any research on the people who travel with him. Can these new friends be trusted? The question adds to the suspense, but the blind faith in random strangers doesn’t ring true.

Like the first installment of the Max Tilt series, 80 Days or Die jumps from location to location in a rush against time. Younger readers will enjoy seeing a fascinating underground cavern, strange wolf people, the icy Antarctica and a glimpse of the desert. Several times throughout the story, Max and Alex just happen to run into the perfect person to assist them. Although the additional characters were needed to advance the plot, their appearance and willingness to help is unrealistic.

Lerangis writes a solid adventure, sprinkled with surprises and interesting landscapes. However, having a cast of untrustworthy supporting characters made the story less fun. After all of the hardships Max and Alex endured in Fire the Depths, their trusting nature seemed misplaced. Max and Alex’s blind trust in other people will bother some readers, especially when one of the characters they trust ruins a perfectly happy ending.