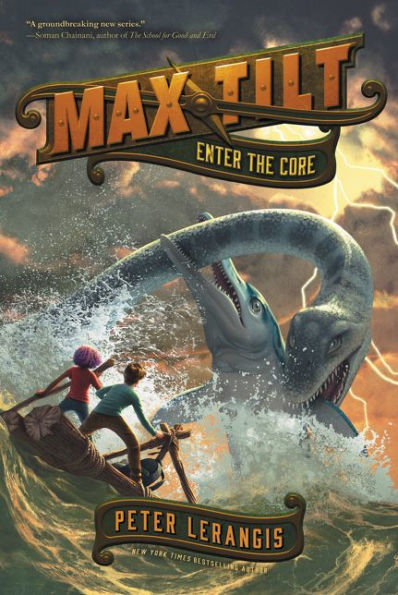 “We are a special breed, the doofus descendants of geniuses. We complement each other,” Alex. –Enter the Core

Max Tilt thinks his luck is finally changing thanks to his great-great-great-grandfather Jules Verne’s unfinished, unpublished manuscript, The Lost Treasures. Using the clues Verne left behind, Max and his cousin Alex were able to bottle the magical healing elements needed to cure his mother’s illness just in the nick of time.

But then Max and Alex discover that the vials were stolen by their former friend, Bitsy. She has plans to use them to save the world, but her plans might be much more deadly than they seem. And so now it’s up to Max and Alex to stop her before it’s too late.

Working against the odds, the two kids glean clues from one of Verne’s best-loved books, Journey to the Center of the Earth. In it, they discover a map to their most dangerous destination yet—the very core of the world. So, now the two cousins are off on their most unlikely, most important quest yet—literally to save the world!

Max Tilt: Enter the Core has everything that adventure seekers could want in a book: non-stop action, interesting clues to solve, and a wonderful cast of diverse characters. Readers will be taken on a heart-stopping hike into the center of the earth where prehistoric creatures survive. As Max and his friends travel down the dark corridors and enter creepy caves, they use their combined knowledge (and a couple of ancient talismans) to safely solve the clues that Jules Verne left behind.

Even though the same villain from the previous books appears, the villain creates suspense and conflict without taking center stage. Instead, the focus remains on the descendants of Jules Vernes and his friend Arne Saknusseumm. The story highlights the importance of doing what is best for humanity, instead of what’s best for yourself.

Because many of the characters appear in all three books in the series, readers will want to read the previous books first. Unlike the previous books, Max Tilt: Enter the Core leaves the topics of death and illness out and focuses on the adventure, as Max and his friends follow Jules Verne’s footsteps as described in Journey to the Center of the Earth. In addition to the adventure, readers will enjoy the interplay between Max and his cousin, Alex.

Max Tilt: Enter the Core has the perfect blend of action, suspense, and interesting characters. Readers will want to read to the very last page. The heart-warming conclusion will leave readers with a smile. Sci-fi and action-seeking readers should definitely pick up the Max Tilt Series.

“We are a special breed, the doofus descendants of geniuses. We complement each other,” Alex. –Enter the Core