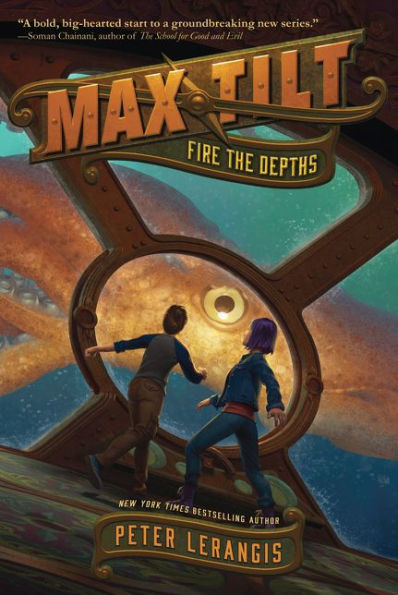 "Sometimes you can't be ready to do the things you really need to do. You just do them. And that makes you ready," Alex. —Fire the Depths

Thirteen-year-old Max Tilt’s life changes in a moment. When his mother becomes ill, his cousin Alex comes to care for him. When Max discovers his parents are in danger of losing their home, Alex and Max want to find a way to help. They head to the attic to find items to sell and discover Max’s great-great-great-grandfather Jules Verne’s unfinished manuscript The Lost Treasures. What begins as a quest for artic items becomes a treasure hunt as Alex and Max learn that everything Jules Verne wrote in Twenty Thousand Leagues Under the Sea was true.

As Alex and Max begin their journey, a strange skunk-haired man named Spencer Niemand appears. He’s determined to steal The Lost Treasures’ manuscript and claim the treasure as his own. However, he needs the kids’ help. Can Max and Alex outwit the devious man who is willing to use violence to gain the treasure?

There is a lot to like in Max Tilt: Fire the Depths. Right from the start, the story is fast-paced and interesting. Although the story is a bit far-fetched, especially the part where his parents leave knowing the electricity will be turned off and the house repossessed, these events explain why Max and Alex are willing to go on a dangerous treasure hunt in order to help.

As the two cousins begin their journey, they don’t realize the danger that follows. As the two follow Jules Verne’s path, they use clues he left behind, but they are soon trapped in a submarine with a villain. As they struggle against an evil villain, they dive to a city beneath the ocean, explore an ice cave in Greenland, and fight a giant squid. This page-turner keeps readers engaged using suspense, adventure, and a bit of humor.

The interplay between Alex and Max helps readers engage in the story. Throughout the story, the two cousins build a friendship and learn to rely on each other in dire situations. Each shows their bravery in different ways. Alex is unique in that he has synesthesia (where one sense substitutes for another) and the effects of synesthesia are shown in a simple, unique way.

Although this adventurous story is written for the ages of eight and up, the story is more appropriate for middle school students because of the violence and the truly evil villain. Although the violence is not described in graphic detail, the villain kills others in order to satisfy his greed. The action-packed plot takes Max and Alex on a submarine ride to an epic adventure that will engage students and teach that, “Sometimes you can’t be ready to do the things you really need to do. You just do them. And that makes you ready.”

"Sometimes you can't be ready to do the things you really need to do. You just do them. And that makes you ready," Alex. —Fire the Depths