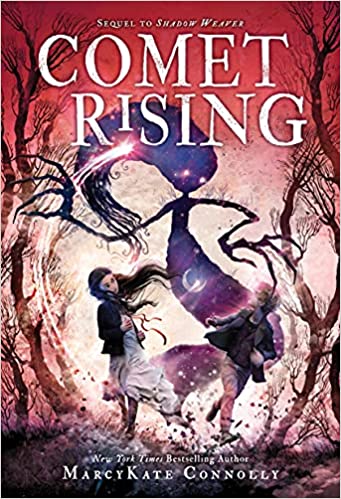 “I love my shadows—they are good and sweet and dear. I’d never want to use them as weapons. I don’t even want to hurt Lady Aisling. I just want her to stop . . .” Emmeline. –Comet Rising

Emmeline, Lucas, and Lucas’s parents escaped from Lady Aisling’s grasp and are hiding away in a house by the sea. They are safe for now. Dar, now imprisoned in a tiny cage, is the only person that is ruining their relatively peaceful seclusion. Dar tells Emmeline that the Cerelia Comet is coming sooner than expected, but Emmeline doesn’t believe her. The Cerelia Comet comes every 25 years, and it’s been 13 years since its last appearance. However, upon seeing the comet soar through the night sky, it becomes clear that Lady Aisling has a sky shaker on her side who moved the comet’s orbit so it could arrive 12 years earlier. Lady Aisling could add more talents to her collection.

Lucas’s parents tell the other families about the comet’s arrival. Eventually, Lady Aisling finds their house by the sea and tries to capture everyone. Lucas’s parents tell Emmeline and their son that they will meet them at an old friend’s house but are caught by Lady Aisling’s soldiers. It is up to Emmeline and Lucas to find more talented children to join in the fight to stop Lady Aisling. But when Emmeline accidentally frees Dar, they find out that the children they seek have already been captured. Now, Emmeline and Lucas know that they must fight for their lives and the lives of talented children just like them.

Comet Rising starts where Shadow Weaver ended, pulling the reader into an action-focused adventure that builds upon the last. The story includes more details about talented people and the land of Zinnia, but those facts do not muddle the story. Once again, the narrative focuses on Emmeline’s point of view, which is concise and optimistic, making the events easy to follow. She becomes more self-assured as she and Lucas find more talented children, but as the story continues, she grapples with how she wants to defeat Lady Aisling. Readers will relate to the weight of Emmeline’s newfound responsibility and her being peer pressured, like when she refuses a friend’s suggestion to weaponize her shadows. In the end, she accomplishes her goal without compromising her values.

Emmeline also learns about forgiveness and becomes more willing to forgive Dar for her betrayal. Dar had tricked her into releasing her from the cage. She went off on her own to defeat Lady Aisling because of a personal grudge. Dar has eluded Emmeline and also done a lot of bad things to Emmeline, like impersonating her while traveling on her own. But after all is said and done, and Lady Aisling is no longer a threat, Emmeline forgives Dar because “everyone deserves a second chance.”

Comet Rising is a story that draws upon the fantastical and magical. The story has plenty of action and also answers questions asked in the previous book. Plus, it expands upon the characters, including the villain. Younger readers will enjoy reading the spellbinding descriptions of magic as well as learning about trust, forgiveness, and responsibility. Readers who liked Comet Rising by MarcyKate Connolly may want to read similar books like Jinxed by Amy McCulloch and The Revenge of Magic by James Riley.

“I love my shadows—they are good and sweet and dear. I’d never want to use them as weapons. I don’t even want to hurt Lady Aisling. I just want her to stop . . .” Emmeline. –Comet Rising