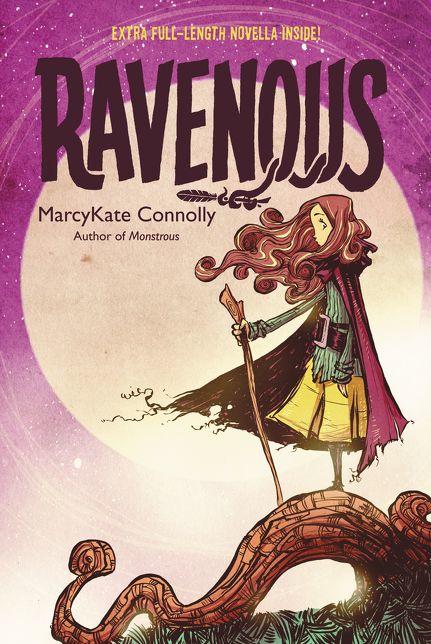 “Love is a powerful thing. But fear and love combined are enough to drive anyone to strange feats of will,” Greta. –Ravenous

Traveling on her house with chicken legs, a witch has arrived in the city of Bryre, and she is ravenous for children. While Greta is at the castle of Bryre, the witch captures her bother, Hans. Greta refuses to let the witch have her brother—after her parents disappeared, her brother is the only family she has left—and they strike a deal. The witch will give back Hans if Greta brings her something, a magical item the witch desires.

However, the Bryrian king thinks Greta is lying about her brother. When she ventures out on her own, a village of hybrids captures her, pausing her progress. With the help of a magical half-boy and half-horse named Dalen, Greta travels to Belladoma—a kingdom that once held her captive—to find the magic item. Mercenaries block their path, and the Sonzeeki, an ancient, tentacled sea creature, is getting restless. In the middle of the chaos is a family secret that can help Greta save Belladoma and defeat the Sonzeeki.

Set in the kingdom of Belladoma and its surrounding area, each chapter follows Greta’s perspective. The kingdom of Belladoma overlooks the sea; the streets are dark and depressing due to the mercenaries and the Sonzeeki’s terrorizing of the castle town. The first page of every chapter is decorated with alternating pictures of Greta, the Sonzeeki, Dalen, and the witch, allowing the reader to visualize the characters. While the narration is limited to Greta’s perspective, readers will relate to her determination and wit. Though she is weaker and smaller than the leader of the mercenaries, she uses her “swiftness” and her “ability to not let go” to best him in a fight.

Throughout Ravenous, Greta changes her opinion about Belladoma. She realizes they are her people since they had been affected by the former king’s and the mercenaries’ rule just like she had. She had assumed that Belladoma, and by extension its people, was bad because her captors had taken her there as food for the Sonzeeki; she thought the people were complicit with the captors. The dynamic between Dalen and Greta is lovely. At first, they’re enemies, but they connect over puzzles and stories and become friends. Dalen is one of the people that helped Greta realize that the people of Belladoma are “not bad people. They’re victims too.”

Ravenous is reminiscent of Hansel and Gretel and has elements of Baba Yaga. The story is an original and engaging retelling that adds a spin to the classics. There are a few instances of graphic violence and many acts of magic scattered throughout the story. The way the adults treat Greta is deplorable because they think she is incapable, then change their minds when she defeats them. The mercenaries look down on Greta due to her age, then perceive her as a threat after she wins against their boss, Vincali—to them, she is not “a mere child.” The lesson is this: do not underestimate people because of uncontrollable factors. Readers who enjoy reading Ravenous will also enjoy the companion book, Monstrous.

“Love is a powerful thing. But fear and love combined are enough to drive anyone to strange feats of will,” Greta. –Ravenous