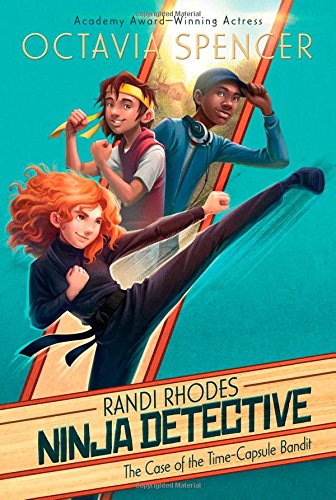 The town’s founding fathers put a note in the time capsule. The note reads, “We were prosperous because our friendship is more precious to us than any riches on earth.” –The Case of the Time-Capsule Bandit

The Case of the Time-Capsule Bandit

Deer Creek is a small town whose only hope for survival is the success of the Founders’ Day Festival. But the festival’s main attraction, a time capsule that many believe holds the town’s treasure, has gone missing.

Twelve-year-old Randi Rhodes and her best friend, D.C., are Bruce Lee-inspired ninjas and local detectives determined to solve the case. Even if it means investigating a haunted cabin and facing mean old Angus McCarthy, who is the prime suspect. The future of their whole town is at stake! Will these kids be able to save the day?

Randi is a plucky heroine who isn’t afraid to jump into danger if it means solving a case. When her father decides to move the family to Deer Creek, Randi is convinced that she will die of boredom. However, she is soon sneaking around town looking for clues that will reveal who took the town’s time capsule. Along the way, Randi meets D.C. and the two connect over their love of martial arts. As they hunt for clues, they also learn about the importance of friendship. This theme is reinforced when they read a letter written by the town’s founding fathers who wrote, “We were prosperous because our friendship is more precious to us than any riches on earth.”

Many readers will relate to Randi and her friend D.C., who face real-world conflicts. Randi is not only struggling with the loss of her mother; she also believes her father doesn’t understand her. Randi’s friend D.C. worries about his mother’s financial issues. He also gets frustrated because his mother treats him like a sick little boy because he has asthma. While the story focuses on Randi and D.C., the town is full of interesting people who add both conflict and humor to the story.

With plenty of action and suspense, The Case of the Time-Capsule Bandit will entertain mystery-loving readers. In addition, readers will learn the necessary skills to sleuth on their own. Throughout the story, readers are prompted to go to the appendix and complete a “Ninja Task.” These tasks include how to conduct a stakeout, how to make a footprint cast, how to collect a dusty footprint, etc. The appendix also includes recipes for making caramel apples and ice cream. Another positive aspect of the book is the full-page, black-and-white illustrations that appear, on average, every 24 pages.

The Case of the Time-Capsule Bandit is a fast-paced story that brings the town of Deer Creek alive. Like many stories, the book has a group of bullies, a misunderstood town outcast, and a small-town sheriff. Despite this, Randi’s love of ninja’s, spying, and solving mysteries makes The Case of the Time-Capsule Bandit a fun read. Plus, the conclusion adds several surprises that tie up all the story threads and remind readers that friends help each other become better people.

The town’s founding fathers put a note in the time capsule. The note reads, “We were prosperous because our friendship is more precious to us than any riches on earth.” –The Case of the Time-Capsule Bandit