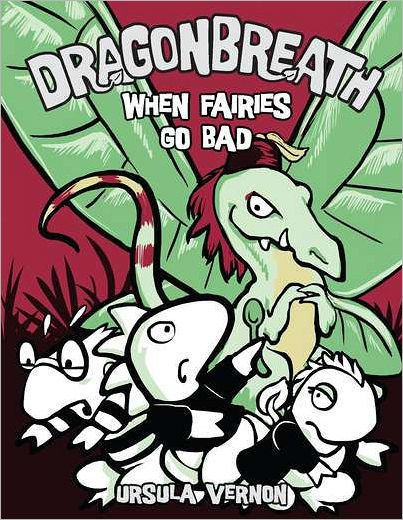 “Danny might not be as smart as his friends Wendell and Christiana, but he’d read enough comic books to know that you didn’t mess around with strange stuff that glowed.” –When Fairies Go Bad

Everyone knows rule #1 in the dragon world: Never, ever mess with a dragon’s mama. So when Danny Dragonbreath’s mom gets kidnapped by fairies, Danny, his best friend Wendell, and know-it-all Christiana hop on the first bus to the Faerie realm to show those fairies who’s boss. But these are not the sparkly Tinkerbell kind of fairies. These guys play dirty. Escaping fairyland with Danny’s mom is no easy task, even for a sort-of-fire-breathing dragon.

When Fairies Go Bad uses fairy folklore to create a hilarious, action-packed story that will have readers giggling. When Danny’s mother is kidnapped by fairies, Danny and his friends, Wendell and Christiana, are determined to save her. As they march through fairyland, they must stay on the path in order to stay safe. However, several of fairyland’s creatures try to trick the three friends into straying off the path. Fairyland’s creatures are more silly than scary, and readers will enjoy seeing how the friends work together to keep focused on their goals.

While in fairyland, Christiana is cursed and all of her sentences must end in a rhyme. To add to the humor, Christiana also doesn’t believe she is really in fairyland. At one point she says, “Yet more talking mammal dreams? My subconscious is obsessed, it seems.” Christiana’s rhymes add humor to the story. Readers will enjoy the humor of the story as well as how Danny and his friends are able to free Danny’s mother.

Green and black illustrations add to the allure of the book. Drawings with dialogue balloons help break up the text and keep the action moving. Dragonbreath shows the value of friendship and will get even the most reluctant readers engaged in the story. Although When Fairies Go Bad is the seventh book of the Dragonbreath series, the story can be enjoyed as a stand-alone story. Readers who enjoy the Dragonbreath series may also want to try The Notebook of Doom Series by Troy Cummings.

“Danny might not be as smart as his friends Wendell and Christiana, but he’d read enough comic books to know that you didn’t mess around with strange stuff that glowed.” –When Fairies Go Bad