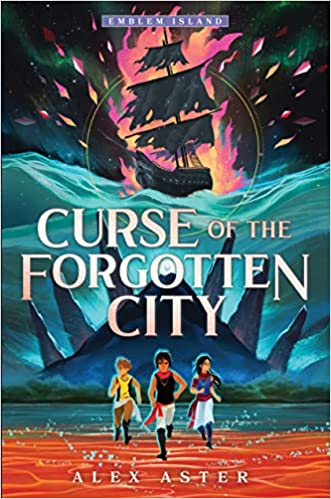 Other books by Alex Aster

“You might not have asked to be the Night Witch’s heir, but it happened. You can either accept it and use what she gave you to change the world for the better, or you can continue to feel sorry for yourself,” Vesper. –Curse of the Forgotten City

Curse of the Forgotten City

It’s been one month since Tor Luna inherited the Night Witch’s power and received a warning that greater threats would come to Emblem Island. Tor and his friends, Melda and Engle, have found the past month to be drearily ordinary, with Engle remarking that he misses a bit of adventure. That is, until a girl named Vesper washes ashore on the beaches of Estrelle proclaiming that a band of evil pirates, called the Calavera, have come to conquer Estrelle and Emblem Island. Before the pirates make their attack, the Calavera are searching for the Pirate’s Pearl, which would give them the power of the sea (and an easy way to crush any resistance from the people of Estrelle). Tor, Melda, and Engle, are determined to find the pearl before that happens.

Along with Vesper, the four friends find a magical ship in the Night Witch’s castle and set sail. Like their last adventure, the group has a guide, The Book of Seas, which they use to outsmart creatures and curses they encounter on their journey. While tracking down the Pirate’s Pearl, the four also accept Captain Forecastle, a pirate, into their makeshift crew. In addition to battling threats at sea, Melda and Tor distrust Vesper’s secretive nature. They discover that Vesper’s brother is working with the Calavera. Vesper has no intention of helping the pirates but rather wants her brother to be safe.

During a run-in with the Calavera, Tor, Melda, Engle, and Vesper manage to outsmart the pirates and obtain the Pirate’s Pearl. The group travel back to Estrelle to confront the pirates before they attack Emblem Island. Now that Vesper’s loyalty has been proven, Tor gives Vesper the pearl, which she uses to control the sea and defeat the Calavera. Emblem Island is safe once again. . . but not long after, Tor realizes that a strange mark on his arm has something to do with the Night Witch’s obscure powers.

Curse of the Forgotten City’s plot twist and villains aren’t as complicated or shocking compared to the first book in the series, Curse of the Night Witch. However, readers will enjoy learning more about Tor’s newfound magical abilities since Tor must master the witch’s powers even though he doesn’t want them. For example, he finds its easier to accept his destiny as the Night Witch’s heir when he stops wishing he didn’t have her abilities and instead tries to use them for good. By embracing his new skills, Tor is able to command the ship that retrieves the Pirate’s Pearl. His willingness to accept something for the sake of others makes Tor a selfless and admirable character.

Another key aspect in the book is the loyalty between Tor, Engle, and Melda. Their relationship is strained due to the secrets they keep from one another and their mixed opinions on Vesper. However, they find that trusting each other and extending that trust to outsiders is well worth the risk. For example, Tor realizes that he “had been focused on his own pain. His own regret. . . Tor should have realized that [Engle] had been hiding his hurt behind jokes and laughs.” Tor’s decision to be honest helps the friends not feel so alone in their struggles. Additionally, when three friends decide to trust Vesper, she ends up being their most useful ally as she is the one who defeats the Calavera in the end. The story teaches that letting others into our hearts is essential to bringing out our inner strength. Readers who want to jump into another magical world with a strong protagonist should also read Tristan Strong by Kwame Mbalia.

Other books by Alex Aster

“You might not have asked to be the Night Witch’s heir, but it happened. You can either accept it and use what she gave you to change the world for the better, or you can continue to feel sorry for yourself,” Vesper. –Curse of the Forgotten City