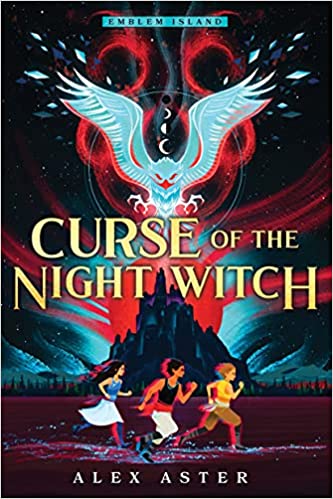 “There are many ways to be strong that don’t require a sword,” Melda. –Curse of the Night Witch

Everyone on Emblem Island has a symbol that decides their fate, but Tor Luna seems like the only person who hates the one he’s been given. While other people can speak with animals, have beautiful singing voices, or culinary talent, Tor’s emblem is for leadership. He expects to live an uneventful life and take over his mother’s position as town chief. On the New Years’ holiday, Eve, the town gathers to send their yearly wishes to the wish god. Tor decides that this Eve he’ll wish for a new emblem. However, rejecting one’s emblem is a sure-fire way to get cursed, which is exactly what happens when Tor wakes up the next day with a curse mark where his leadership emblem once was.

Tor teams up with his friends, Melda and Engle, to find the legendary Night Witch, a fearsome woman who is said to have hundreds of emblems that she gained from killing their original owners. To find her, the group uses The Book of Cuentos, a storybook that includes legends about Emblem Island’s history that turn out to be more than just stories. Eventually, they reach the Night Witch – but things aren’t as clear-cut as they have been written in the storybook.

The Night Witch used The Book of Cuentos to frame herself as a villain in order to prevent her from getting her power stolen. She warns Tor that a greater darkness, one that is all evil, is rising and that she has picked Tor as her successor. Tor is unwilling to inherit her abilities, but the Night Witch passes on her power anyway. She picked Tor because the Night Witch believes he won’t abuse her skills. She says: “the best leaders are the ones who don’t want to lead.” The book ends with Tor shouldering the heavy burden of the Night Witch’s abilities with his friends and family at his side to defend Emblem Island from the coming darkness.

Curse of the Night Witch is steeped in Latin American folklore amplified by the author’s rich imagination. The book is heavy on worldbuilding that is relevant to the plot and is an immersive part of the story’s adventure. The stories from The Book of Cuentos can be unsettling, but they help craft a world where darkness lingers under a colorful exterior. In addition to being a detailed story, Curse of the Night Witch is a coming-of-age story as Tor and his friends undertake a dangerous journey. When Tor thinks the Night Witch is going to kill him, Tor wishes he would’ve been more grateful for what he had. However, he realizes that his journey has taught him to appreciate what he’s gained: Melda and Engle, “two friends he would trust his life with” as well as a deeper respect for his former emblem.

Tor is a thoughtful and determined main character who will quickly earn the sympathy and respect of readers. His drive to improve himself while still protecting innocent people shows his emotional complexity. The story emphasizes the power of friendship through Melda, Engle, and Tor, who are always ready to support one another and see their journey through until the end, no matter what happens. The plot twists and compelling lore make this an interesting story, however, there is gore and violence that some readers may find disturbing. Readers who want to read another tale that combines a rich cultural world with three friends who will protect each other until the end will enjoy Maya and the Rising Dark by Rena Barron.

“There are many ways to be strong that don’t require a sword,” Melda. –Curse of the Night Witch