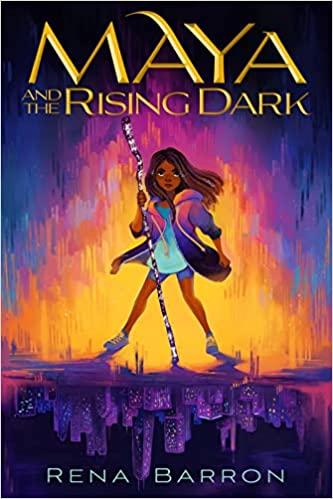 “If we shun our responsibilities, who will make sure that the work gets done?” Papa. – Maya and the Rising Dark

Maya believes herself to be an ordinary middle-schooler, until she witnesses a tear in reality. Suddenly, the stories her father tells about his travels across the world come true. Maya dreams of a man encased in shadows and is attacked by mythical creatures. In addition, her best friend Frankie discovers she has superpowers.

Maya learns that her father is an orisha, a divine spirit being. Beyond that, her community is a secret haven for orishas, meaning that she, Frankie, and their friend Eli, all have orisha powers. But, the one person Maya wishes to tell about the magic world – her Papa – disappears while repairing the veil, the magical barrier between Earth and the Dark. In his absence, Maya learns from the orisha council that her father is the guardian of the veil, which was created to separate Earth from the Dark and its master, The Lord of Shadows. This evil being with similar orisha-like powers wants to use the tears forming in reality to break through the veil once and for all.

As attacks in the human world become frequent, the orishas prioritize the community instead of sending out a rescue mission for Maya’s father. Maya, Frankie, and Eli decide to take matters into their own hands using Papa’s staff to open a magical gateway into the Dark at Comic-Con. Even though the plan is just as crazy as it sounds, Maya is able to open the barrier, and the three friends journey through the Dark. This sparse and dangerous landscape is populated with creatures of legend and beings called darkbringers, who serve the Lord of Shadows. When the group is forced to fight their way through, Maya realizes the danger that they face. She says, “I hadn’t thought through the consequences of our actions… I knew that our parents would ground us for sneaking out. But that was minor compared to the real consequences. That I might have to hurt many people to get Papa back.”

Before Maya reconnects with her father, she is tested when she is forced to part with her friends, who sacrifice themselves so she can go on. Maya says, “Every kid should be so lucky to have friends who believe in you even when you don’t believe in yourself. Friends who accept you exactly the way you are. And help you be brave when you don’t know that you can.” Maya is able to manifest her orisha powers and distract the Lord of Shadows long enough to free her father and return to the human world, where she finds that Eli and Frankie escaped alive and unharmed. But, the crisis is far from over. With the Lord of Shadows still at large, the orisha council declares that Maya will be trained by her father to be a guardian of the veil, marking the beginning of her next journey.

Maya and the Rising Dark is an action-packed fantasy story with diverse characters. The principal at Maya’s school goes by they/them pronouns and Frankie has two moms. Maya’s story is laced with themes of community and sacrifice. While constant fighting scenes can distract from the main plot, Maya is a resilient and thoughtful main character to follow throughout this adventure. There is reverence for the divine orishas, and even for the Lord of Shadows; when he is about to kill Maya’s father, she displays sympathy for his motives, showing her maturity. Maya has to grow up fast when the responsibility of saving the world falls on her shoulders, but she does so while keeping her rebellious personality and her kindness. The story blends the African heritage of the author into a modern-day tale about a girl from Chicago’s south side. Readers that enjoyed Aru Shah and the End of Time by Roshani Chokshi and stories blending cultural legend into modern adventure, should pick up this book! Amari and the Night Brothers by B.B. Alston is another amazing story that is perfect for readers who love action and adventure.

“If we shun our responsibilities, who will make sure that the work gets done?” Papa. – Maya and the Rising Dark