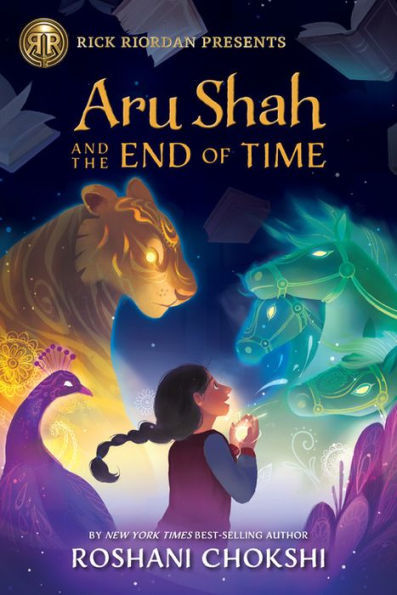 “Was she a heroine if all she did was fix a mistake she made? Or was it heroic because she was willing to fix it in the first place?” Aru. –Aru Shah and the End of Time

Aru Shah and the End of Time

Aru makes up stories such as having a fancy chauffeur and traveling to Paris. She doesn’t mean to tell lies, she just wants to fit in at her private middle school. While her classmates are vacationing in exotic places, Aru is stuck at home, which just happens to be connected to the Museum of Ancient Indian Art and Culture.

Not all of Aru’s classmates believe her stories. One day, three students show up at Aru’s home hoping to catch her in a lie. Aru told them that the museum’s Lamp of Bharata is cursed. When they dare her to light the lamp, Aru doesn’t really believe anything bad will happen.

Aru doesn’t know that lighting the lamp will change her life forever. When the fire touches the wick, it awakens the Sleeper, an ancient demon, who is intent on awakening the God of Destruction.  Now Aru’s mother and her classmates are frozen. Aru must do something to save them, but how is a young girl supposed to defeat an ancient evil?

Aru Shah and the End of Time will captivate readers from the first page. Action, adventure, humor, and interesting places in Indian Mythology come to life. The beautiful descriptions and interesting characters (including a pigeon sidekick) are just some of the reasons readers will fall in love with Aru’s world. Although the story contains many Indian words, the reader can figure out most of them through the story’s context. The back of the book contains a glossary that helps explain the Indian Mythology and terms.

Told from Aru’s point of view, readers will relate to her desire to fit in and her struggle with being truthful. Aru and her companion, Mini, are unlikely, lovable heroines. As the two girls fight to defeat the Sleeper, they discover that one doesn’t have to be perfect in order to accomplish great things, such as saving the world.

Told with compassion and humor, Aru Shah and the End of Time is a must-read for middle school girls. Not only will the story take readers on an amazing adventure, but it also teaches the importance of friendship, working together, and honesty. Because of Aru’s experiences, she realizes the importance of looking at situations from different perspectives. The many lessons in the book are seamlessly integrated into the plot and never feel forced. Once you open the pages of Aru Shah and the End of Time, you will not want to put the book down.

“Was she a heroine if all she did was fix a mistake she made? Or was it heroic because she was willing to fix it in the first place?” Aru. –Aru Shah and the End of Time