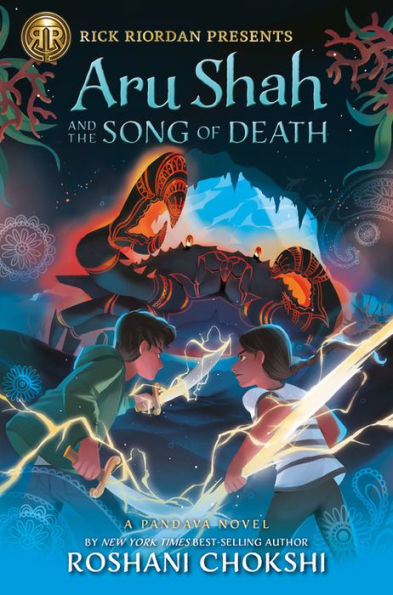 “All I’m saying is that no one can take your place if you make room for them. Trust yourself more than you distrust others,” Aru’s mom. –Aru Shah and the Song of Death

Aru Shah and the Song of Death

Aru and Mini are just beginning Pandava training. But then someone steals the god of love’s bow and arrow, and the thief isn’t playing Cupid. Instead, the shape-shifting thief is turning men into heartless, fighting zombies. The Otherworld is in a panic, and they think Aru is the thief. The gods have decided that Aru must find the weapon within ten days, or both she and Mini will be kicked out of the Otherworld—forever!

Aru won’t be alone on her quest. Along with her Pandava sister, Mini, Aru unwillingly teams up with super-strong Brynne and Aiden, the boy who lives across the street. But Brynne and Aiden are keeping secrets, and Aru isn’t sure she wants them on her team. Still, they must find a way to battle demons and travel through the dangerous serpent realm together.

Getting along with Brynne and Aiden isn’t Aru’s only challenge in Aru Shah and the Song of Death. She must also overcome her own mind, where the Sleeper’s words, “You were never meant to be a hero,” still resonate. Will Aru be able to overcome her self-doubt? Can she prove that she has what it takes to be a hero?

This second installment in the Pandava series takes the reader on a wild ride through the Otherworld. Full of action and adventure, the story adds interesting characters including a crab that is angry that his brother can sing, a handsome boy, and another Pandava sister. Still, readers who fell in love with Mini and Boo will miss them in this book; Boo has a tiny appearance, and Mini spends much of the story in the land of the sleep.

This story highlights the complicated nature of people. Although the villain is clearly acting villainous, the villain is shown to have other sides to her nature. As Aru learns more about India’s history, she discovers that just a hero can also be a monster. The theme is reinforced when Aru’s mom says, “sometimes villains can do heroic things and heroes can do villainous things.” The villain’s story shows that there are always two sides to every story; however, the villain’s past does not excuse their bad behavior.

Also threaded throughout the story are strong messages of treating people with respect, as well as putting others before yourself. Since several of the characters can shape-shift, the reader will see that physical appearances can be deceiving. At one point in the story, Aiden says, “I just don’t think people should be mean to someone because they don’t like the way they look.”

Aru Shah and the Song of Death is a highly entertaining story that brings India’s mythology to life. Because the story has many characters based on mythology, readers not familiar with India’s mythology will need to use the glossary that appears at the back of the book. The different realms of the Otherworld are beautifully described, the gods are diverse and interesting, and the battle scenes are often filled with humor. This book will leave readers thinking about the complicated nature of people and the importance of compassion. As one god said, “Just because something is not fair does not mean it is without reason or even compassion.”

“All I’m saying is that no one can take your place if you make room for them. Trust yourself more than you distrust others,” Aru’s mom. –Aru Shah and the Song of Death