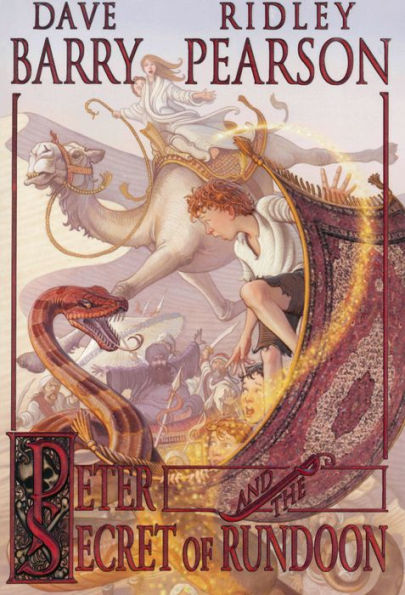 “That’s the thing: I never actually saw him. He was more like a cape with a black ghost inside. And the way he moved . . . it gave me the frights, I don’t mind telling you,” Slighty. Peter and the Secret of Rundoon

Peter’s home is Never Land island, but his Lost Boys are starting to grow up and lose interest in island life. Before Peter can worry too much about what this means, the island is besieged by a tribe of warriors called Scorpions. With Peter wounded and the Mollusk’s defeated by the Scorpions, no one is prepared when Lord Ombra returns to the island, kidnapping Peter and his orphan friends.

Whisked away to Rundoon, the boys wonder what Lord Ombra wants from them. Peter isn’t sure if he even can do what Lord Ombra wants, but with his friends’ lives at stake, he feels he has no choice. Unbeknownst to him, Molly and her father are on their way to help. But will their appearance really be the dramatic rescue they’re hoping for? Or will their appearance actually bring about the end of the world, of light, and of the entire universe?

The third installment continues to jump from perspective to perspective, showing what’s happening from Never Land to Rundoon and places in between. However, unlike the previous books in the series, there is no main storyline to hook readers’ interest. Without one larger perspective shaping the narrative, it may be difficult for readers to become emotionally engaged in the plot.

While there is plenty of action, Peter and the Secret of Rundoon, unfortunately, lacks the suspense of the previous installments. On top of this, not all the characters behave in a way that is consistent with their personalities in previous books. For instance, Smee becomes Acting Captain Smee after Captain Hook goes missing. Smee, who in previous books could barely string a sentence together or walk three feet without tripping, suddenly becomes well-spoken in his interactions with Shining Pearl, the Mollusk chief’s daughter.

One aspect parents might want to take note of is that this book continues and expands the theme of children disobeying and being praised for their disobedience. Peter disobeys Fighting Prawn and almost dies from an arrow wound; yet Fighting Prawn says, “you did well, disobeying me.” Continuing from the end of the previous book, Molly consistently throws fits, disobeys her father, and then is praised for disobeying him. These events are painted as though the children knew better, and it is unrealistic that adults would praise the children for their disobedience when it puts them and others in mortal danger.

“That’s the thing: I never actually saw him. He was more like a cape with a black ghost inside. And the way he moved . . . it gave me the frights, I don’t mind telling you,” Slighty. Peter and the Secret of Rundoon