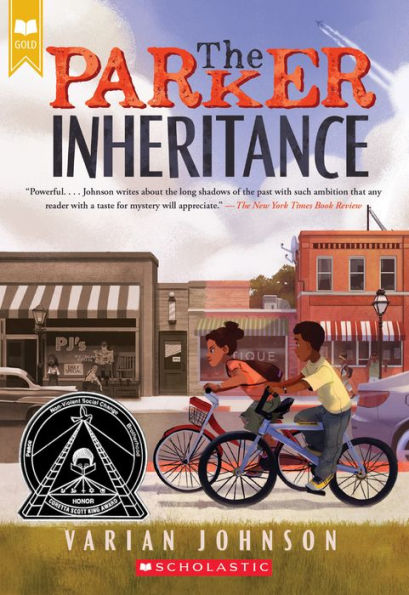 “A mistake isn’t a failure. It’s just an opportunity to try again,” Grandma. –The Parker Inheritance

When Candice finds a letter, she isn’t sure she should read it. It’s addressed to her grandmother, after all, who left Lambert in a cloud of shame. The letter describes a young African American woman named Siobhan Washington, an injustice that happened decades ago, a mystery involving the letter writer, and the fortune that awaits the person who solves the puzzle.

With the help of Brandon Jones, the quiet boy across the street, she begins to decipher the clues in the letter. The challenge will lead them deep into Lambert’s history—full of ugly deeds, forgotten heroes, and one great love—and deeper into their own family’s unspoken secrets. Can they find the fortune and fulfill the letter’s promise before the answers slip into the past yet again?

The Parker Inheritance is an ambitious story that tackles too many themes, including racism, oppression, love, friendship, bullying, sexual orientation, as well as family dynamics. The story uses flashbacks to delve into racism during the 1950s. Instead of being just a bunch of facts, the flashbacks will have an emotional impact on the reader. While most of the content is appropriate for middle-grade readers, the story does show some brutality as a group of white men attack a black boy.

While The Parker Inheritance is interesting, the complicated plot and the large cast of characters may be overwhelming for some readers. The story flips between the current day and the past as told by many characters. In the present day, Candice and Brandon research as they try to solve the clues. While the story has some mystery, most of the clues are revealed through flashbacks. However, the riddles are interesting, and following Candice’s and Brandon’s thought process is enjoyable.

One of the best aspects of The Parker Inheritance is the message that people can change, and “a mistake isn’t a failure. It’s just an opportunity to try again.” The characters’ personalities are multifaceted, which highlights the complicated nature of humans who often make choices that lead to both positive and negative consequences. For example, Candice’s grandmother was fired from her job, and some of the townspeople thought she was crazy. While this caused Candice’s grandmother to leave town, it also allowed Candice to become close to her grandmother.

In the story, a white boy’s father tells him, “You’ll never understand what it means to be a Negro. You’ll never face the discrimination they see every day. You’ll never struggle the way they do.” However, The Parker Inheritance allows readers to see the effects of racism both in the past and in the present. After reading the story, readers will hopefully reevaluate their own actions and be more accepting of people’s differences.

“A mistake isn’t a failure. It’s just an opportunity to try again,” Grandma. –The Parker Inheritance