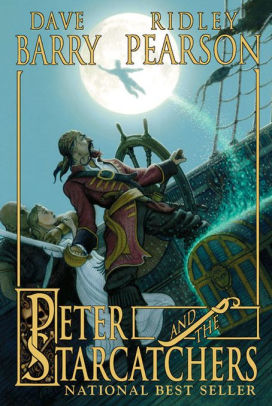 “Can you . . . can you do that any time? I mean, could you just fly around whenever you want? Like a bird?” Peter. - Peter and the Starcatchers.

Peter and the Starcatchers

Peter thinks life cannot get any worse after he and some other boys from the orphanage are dumped on a ship. They’re told that they are bound to become servants to a cruel king. But then strange things start happening on the ship: flying rats, talking porpoises, and a mysterious girl named Molly. The strange occurrences all center around one heavily guarded trunk. But when Peter tries to investigate, Molly gets in his way.

Molly’s father is a starcatcher, with a very important mission. He’s supposed to be transporting precious cargo on another ship. When Molly discovers the two trunk got switched and the precious cargo is on her ship, she knows she must guard it from an overly curious orphan boy. However, when the porpoises tell her a pirate is coming for the treasure, Molly may just have to trust Peter in order to stop the powerful treasure from falling into the wrong hands.

The first half of Peter and the Starcatchers bounces between Peter’s, the pirate Black Stache’s, and Molly’s father’s perspective, creating a fast-paced narrative as the three ships maneuver to steal or protect the treasure. The second half of the book takes place on a remote island, after Peter’s ship crashes onto an island reef. Again, the perspective changes frequently from a wide host of characters, but rather than being confusing, the changing perspectives create excitement and allow readers to see what is happening all over the island. Each character is developed enough to have a unique voice, and readers will enjoy watching as each person fights for a different goal.

The story has plenty of action and suspense, which may frighten more timid readers. Anyone who enjoys a swashbuckling adventure will be delighted by the frequent twists and turns as the different parties clash in their struggle for the treasure. By the end of the story, the island becomes quite crowded with people vying for the treasure, including: Peter and the other orphan boys, Molly, Black Stache and his pirates, the island natives, a group of newly-created mermaids, and Molly’s father with his team of Starcatchers. Each group is well-developed and richly described. Readers will love seeing the story from each group’s perspective—even the groups they are rooting against!

While the large cast of characters doesn’t allow for every individual to be deeply developed—for example, most of Black Stache’s crew are stereotypical pirates—every character is colorful and the more prominent characters are well-developed. Peter and Molly are both very likable and are realistically portrayed. For example, they act bravely but admit to being afraid. They also admit when they make mistakes and learn the importance of working together.

While Peter and the Starcatchers shows the importance of working together, its biggest successes are its wonderful cast of colorful characters and a nonstop, zig-zag plot that is packed full of adventure. This is not a traditional Peter Pan stories, but a delightfully creative take on the original tale. Readers will enjoy when aspects of the original story (mermaids, a crocodile, and a one-handed pirate) are revealed. While there are sequels, all of the main story lines are neatly tied up in this book, allowing readers to decide if they want to be satisfied with this adventure or reach for another.

“Can you . . . can you do that any time? I mean, could you just fly around whenever you want? Like a bird?” Peter. - Peter and the Starcatchers.