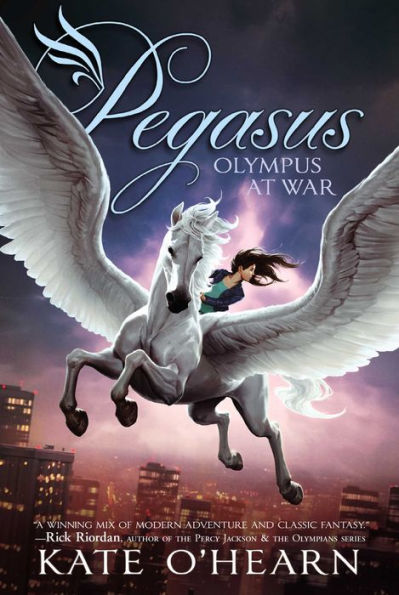 Olympus is under attack, which gives Emily the chance to save her father from the clutches of a dangerous government organization. In order to find her father, she returns to New York with Paelen and Joel. Unbeknownst to the three, Cupid follows them in an attempt to help Emily.

While the Olympian gods fight for their survival, Emily and her friends try to free Emily’s father.  However, they soon discover that Olympus’s fight has followed them to New York. Soon Emily is captured by the Nirads and has to decide how far she will go to save the people she loves.

Pegasus: Olympus at War will capture the reader’s interest from the beginning. The suspense begins on the first page and doesn’t let up until the end of the story. Cupid is a welcome addition to the cast of characters. The Roman gods are not seen as perfect individuals but as complex characters. As the group tries to save Emily’s father, Cupid learns to overcome his fear in order to help his friends.

Emily is an interesting heroine who is a good role model for young readers. As she fights to control her powers, she realizes that there are some things that can never be done, even if that means sacrificing those she loves. Another positive aspect of Pegasus: Olympus at War is that Emily learns to take a look at the Nirads as individuals, and as she does this, she learns the real power of understanding others.