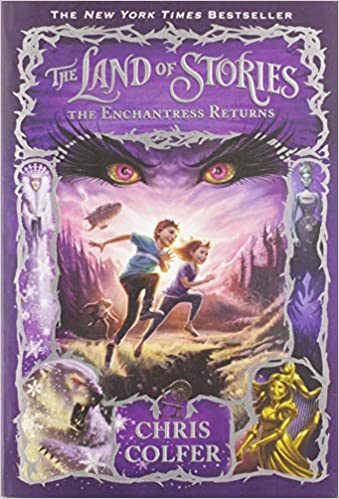 The Land of Stories #2

Alex and Conner Bailey have spent a long time waiting to return to the Land of Stories, a magical world they thought only existed in their favorite fairytales. However, after the events of the first story, The Wishing Spell, the twins know that all their favorite stories are true. After they defeated the Evil Queen in the last book, they returned home dreaming of their next adventure. But, their Grandmother, the legendary Fairy Godmother, has been missing for months, cutting off the twin’s contact to the magic realm. Then, their mother is suddenly kidnapped by the evil Enchantress. In order to bring their mother home, the children are forced to return the Land of Stories without their Grandmother’s help.

Once in the Land of Stories, the twins quickly realize why their Grandmother has been so busy. The Enchantress Ezmia, a wicked sorceress responsible for the former curse on Sleeping Beauty, has returned to take over the fairytale world and the human world. Their only hope to stop her is the Wand of Wonderment, a staff powerful enough to best Ezmia’s magic. The twins must travel through the fairytale kingdoms with their allies in search of magical items to make the Wand, all while avoiding Ezmia and the wrath of other evil beings. Once the staff is assembled, the twins confront the greatest threat of all: Ezmia’s unwavering cruelty. Is magic powerful enough to convince the Enchantress to put an end to her evil plans?

The thrilling second installment in the Land of Stories Series has just as much action, adventure, and fairytale magic as the first book. The Enchantress Returns will hold the reader’s attention at every turn, and readers will be fascinated by the conclusion. Unlike fairytales and their shallow villains, the evil characters in this series have more depth than the average book, making this story an interesting read. In the final battle against the Enchantress, Alex says, “Ezmia, I’ll never be like you. I would rather have nothing and a big heart, than everything and no heart at all. . . I’ll always have the most powerful magic of all inside me–compassion. And I have enough inside of me even for you.” When Alex forgives the Enchantress, Ezmia loses her power, proving that love can overpower hate, even when it’s difficult to extend sympathy to others. Alex’s willingness to forgive shows that she’s not only kind but powerful, even without the use of magic.

The Enchantress Returns also emphasizes the need for belonging. The Enchantress never felt like she belonged, so she made others feel powerless. Alex also never felt like she belonged in the human world since other kids didn’t understood her love for fairytales and magic. Even though it’s a hard decision, Alex chooses to stay in the Land of Stories where she doesn’t feel like an outcast. This parallel ending shows that the heroes and villains of the stories aren’t so different, but how they handle their situations shows their true character.

Readers searching for a funny yet intricate fantasy about the characters from their favorite bedtime stories will find what they’re looking for in The Land of Stories Series. However, there are some scenes that may disturb sensitive readers. Despite this, The Enchantress Returns is an engaging book that teaches important lessons about forgiveness and compassion. Readers who want more fairytale action can jump into an intriguing world where famous villains such as Cinderella’s stepmother and the Big Bad Wolf have changed their ways and become good in the Fairy Tale Reform School Series by Jen Calonita.