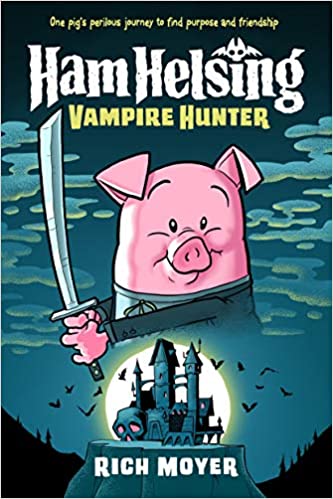 Ham Helsing is the descendant of a long line of monster hunters—who often don’t live long enough to rest on their laurels. Ham has always been the odd pig out, preferring to paint or write poetry instead of inventing dangerous new ways to catch dangerous creatures.

Ham’s brother Chad was the daredevil, carrying on the family legacy of leaping before looking, but after Chad’s death, the family business is left to Ham. Reluctantly, Ham sets out on his first assignment: to hunt a vampire. But Ham soon learns that people aren’t always what they seem and that you need a good team around you to help save your bacon!

Ham Helsing is a unique protagonist who doesn’t jump to assumptions about others. Ham’s original mission was to kill the vampire. Instead of killing him, Ham befriends the vampire and the two join up to find the real villain. Not only does the vampire forgive Ham for his original intent, he praises Ham saying, “The brave can make their own path—their own way.” Despite being from a long line of vampire hunters, Ham departs from his family’s ways and instead of slaying vampires, Ham is a kind and selfless pig who uses his head. The story reinforces the idea that fate doesn’t determine a person’s (or a pig’s) decisions.

While the story focuses on Ham, there are many other interesting characters. There’s a boy who keeps turning into a werewolf, a warthog who has social anxiety, a huge bear who frightens easily and cries, a cute female pig who isn’t afraid to use her sword, and a rat who loves big words. These interesting characters add humor and depth to the story. In the end, the large group of characters works together to defeat an evil chicken, who will be back to rain terror in the second book of the series, Monster Hunter.

Vampire Hunter is told through full-color panels that are full of humor and action and have unexpected surprises. For example, the villain jumps out of a plane and is falling toward a hungry shark, but instead of being eaten, the villain “hugged his way out of it.” Readers will giggle as the villain clings to the shark. Each page has one to six sentences and many of them use onomatopoeia. The low word count and easy vocabulary make Vampire Hunter an easy read. Plus, readers will love the silly puns and jokes. For example, when Ham sees a group supporting vampires, a rabbit says vampires are just “immortal heartthrobs who are trapped in the bodies of lovesick teens!”

Full of adventure, humor, visual gags, and interesting characters, Vampire Hunter is sure to entertain readers. There is plenty of sarcasm and suspense to keep readers flipping the pages. Readers looking for a fun read will come to love Ham Helsing and his friends. For another fast-paced graphic novel with an unexpected hero, grab a copy of The Boy Who Crashed to Earth by Judd Winick—but be warned, once you start reading you will want to read the entire series!