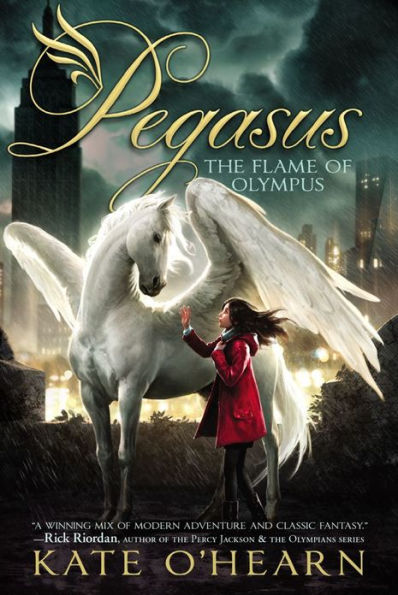 Pegasus: The Flame of Olympus

Manhattan is thrown into darkness during the worst storm in history, so when Emily hears a crash on the top of her apartment, she is reluctant to go investigate. However, her curiosity gets the best of her, and what she finds changes her life forever.

Pegasus has fallen from Olympus during a terrifying fight against the Nirads, stone warriors who are out to destroy everything in their path. In an effort to help Pegasus, Emily teams up with Joel. Along the way, the two are greeted with danger from both the Olympian world and the Earth world. Fighting monsters isn’t Emily’s only worry. She must also learn how to avoid a government agency that wants to capture Pegasus. In the end, will Emily and Joel be strong enough to protect Pegasus and themselves?

Pegasus is a fast-paced story with a lovable heroine, Roman gods, and plenty of action. Because the story is told from Emily’s point of view, the reader is able to connect with not only Emily, but with the other characters as well. Even though the story has violence, the descriptions are mild and allow the reader to imagine the details. O’Hearn weaves the Roman myths into a modern setting that will leave readers wanting more.