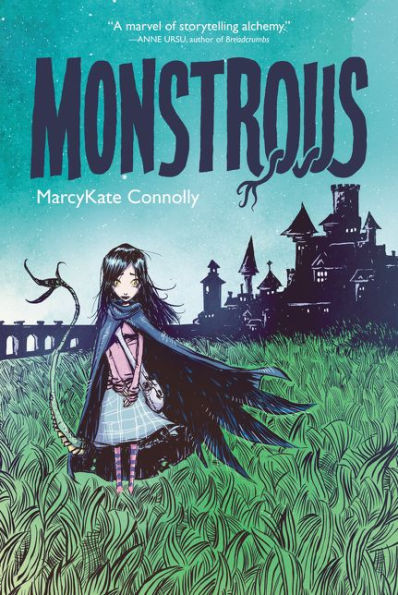 “I do not know about magic, but words are powerful things indeed,” Kymera. –Monstrous

The city of Bryre suffers under the magic of an evil wizard. All the young girls get sick because of his curse and disappear without a trace. No one is allowed outside at night, but for Kymera, night is the only time she can enter the city. Kymera was a victim of the wizard, but her father brought her back to life, and he replaced her burnt body parts with the remains of other girls and modified her body with animal body parts. According to her father, people would not understand her wings, her claws, or her spiky tail. They would not comprehend her purpose: to rescue the missing girls from the wizard’s prison.

Even though she was cautious, Ren, a boy from the city, sees Kymera and leaves a perfect rose for her every evening. Over time, they become friends, and as they talk, Kymera realizes that Ren knows about the missing girls’ plight, the wizard, and the evil magic encroaching on Bryre. And what he knows will change her life.

Set in, near, and around the cities of Bryre and Belladoma, each chapter follows Kymera’s perspective, and the first page is decorated with shifting side profiles of Kymera, her father, Ren, and Batu, a rock dragon, allowing the reader to visualize the characters. However, each chapter details one or more days in her life, which leads to the unique chaptering of non-consecutive days: the chapter format does not make the story confusing. Instead, the chapter format assists in thoughtfully unveiling the setting as Kymera becomes accustomed to her new body and old memories.

Due to her interactions with Ren, Kymera rethinks everything she had known about herself, her father, and her relations with the city. Though Ren and Kymera have a wonderful friendship, their relationship does not extend from their mutual feelings as allies. At first, she is cautious of Ren because she does not know how he will react to her animal traits. Eventually, Kymera fully trusts Ren as she learns the truth about her mission. Despite her initial ignorance about the city of Bryre, Kymera is a fascinating narrator, but her monologues about her true nature make the story drag.

Monstrous takes pieces from classic fairy tales and uses them to make a compelling, unique story. Readers will take away one lesson from the story—know who you can trust. For instance, the king and queen of Bryre make a deal with a wizard to protect Bryre from an unnamed city but decline to compensate the wizard when he asks for their first-born child as payment. Ten years later, he betrays the king by killing the queen and his first-born child—Rosabel.

Rumpelstiltskin is the inspiration behind their deal; The Pied Piper of Hamelin is the inspiration behind its consequences. Readers will enjoy pointing out the fairy tale inspirations and figuring out the true villain’s identity within Kymera’s limited perspective. There are few scenes with graphic violence and many acts of magic scattered throughout the story. All in all, this debut novel by MarcyKate Connolly stands out as an original story while feeling like a classic. Readers who enjoy reading fairytale-inspired stories will also enjoy Royal Academy Rebels Series by Jen Calonita.

“I do not know about magic, but words are powerful things indeed,” Kymera. –Monstrous