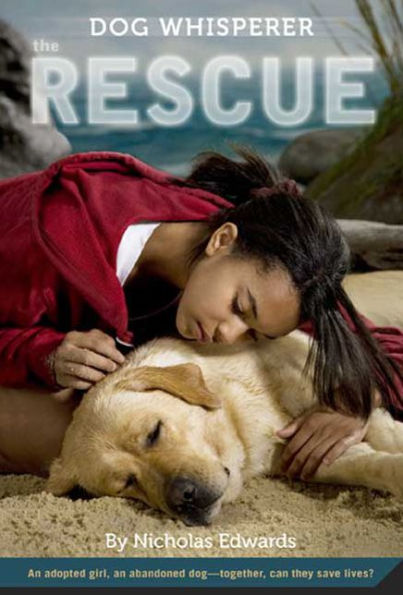 12-year old Emily has dreams of drowning. She’s being sucked under once, twice . . . until the third night, she realizes it’s not just a dream. It’s really happening to someone. On the rocky shore outside her house, Emily finds a large dog. He’s barely alive, but she’s determined to save him. She can feel his pain—and his determination to live. The dog is brought to the vet and with Emily’s help, he starts to improve.

But is the bond between the girl and the dog, Zack, something more? She can see what he sees and feel what he feels. And Zack seems to be able to read her mind, too. Is it possible that together, Emily and Zack can do more than read each other’s minds? Can they use their powers to help people?

The suspenseful story will pull readers in from the very first word. While the story focuses on the dog’s struggle to heal, it also has enough of Emily’s home life to keep the story interesting. The Rescue gives the reader insight into animal abuse without going into details that may frighten younger readers. In the end, readers will cheer when multiple characters come to Zack’s defense and save him from his cruel owners.

Emily is an extremely likable, biracial character who was adopted by a white family. The story has several examples of racism, such as when a white tourist talks to Emily and the lady assumes that if Emily is “in Maine, that must mean that some nice country family took me in for the summer. You know, to get me out of my deprived, inner-city neighborhood.” All of the examples of racism are kid-friendly and highlight Emily’s feelings. She wishes people didn’t see her “as African-American first, instead of a person named Emily.”

The Rescue will appeal to many readers because it is a suspenseful story about friendship, family, and helping a dog in need. While Emily is the only character that is well developed, the supporting characters have enough depth to be believable. Another positive aspect of the story is her family’s healthy dynamic and her supportive best friend. The Rescue is an excellent story that teaches the importance of not making assumptions about other people. Emily’s emotional journey will leave a deep impression on the reader. Readers will be eager to see how Emily and Zack use their unique powers to communicate in the next book in the series, Storm Warning.