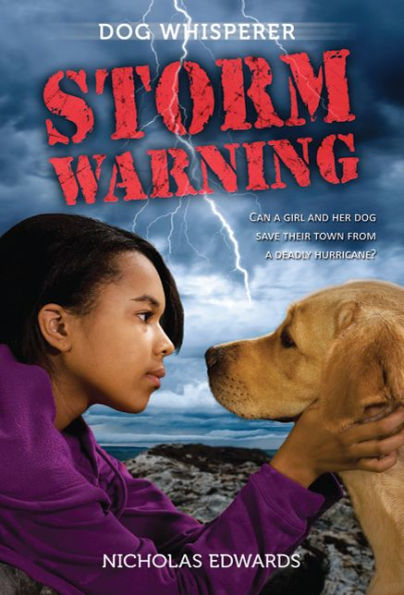 Emily and her dog, Zack, have a special bond. But it’s more than that—they can read each other’s minds. Even more surprising, Zack knows when people are in trouble. Now, Emily and Zack are able to use their powers to save lives, though Emily is endangering hers in the process and making her parents worry.

When a hurricane warning is issued, everyone in town starts preparing for the worst while hoping for the best. After all, what are the odds of a hurricane actually hitting a small town in Maine? Emily and Zack don’t know what’s going to happen, but if the hurricane does arrive, are a girl and her dog enough to save a town from the destructive power of Mother Nature?

Unlike the first installment of the Dog Whisperer Series, Storm Warning lacks suspense and action. In order to establish Emily and Zack’s unusual ability to communicate, the story jumps back and forth between Emily’s school life and her personal life. In addition, the town is preparing for an upcoming hurricane. The multiple plot lines make the story disjointed. However, the scenes where Emily and Zack help injured people add some danger and excitement.

Middle school readers will relate to Emily, who wants more freedom and the ability to stay home by herself. While Emily’s family interactions show a healthy family unit, Emily’s parents struggle to balance Emily’s desire for freedom with their need to keep her safe. Several times, Emily runs after Zack in order to help an injured person and Emily’s parents react in appropriate ways. Even though Emily has a happy home life, she still struggles with the fact that she is adopted and has had no contact with her birth mother.

Most of the characters in this story were introduced in The Rescue, but Storm Warning further develops two key characters—Emily’s best friend, Bobby, and Mrs. Griswold, an elderly neighbor. For those who have read The Rescue, the development of these characters will help reinforce the idea that you should not make assumptions about others.

Unfortunately, Storm Warning has an anticlimactic conclusion with little emotional impact. In addition, Mrs. Griswold tells Emily a confusing fact about her birth mother that leaves Emily wondering if her adoptive parents have been dishonest about Emily’s parentage. However, the story thread is left hanging. Despite the lack of action, readers will enjoy the character development and Zack’s ability to sense a person in need. For maximum enjoyment readers should read The Rescue first. Those looking for a more suspenseful hurricane story should read Hurricane Rescue by Jennifer Li Shotz.