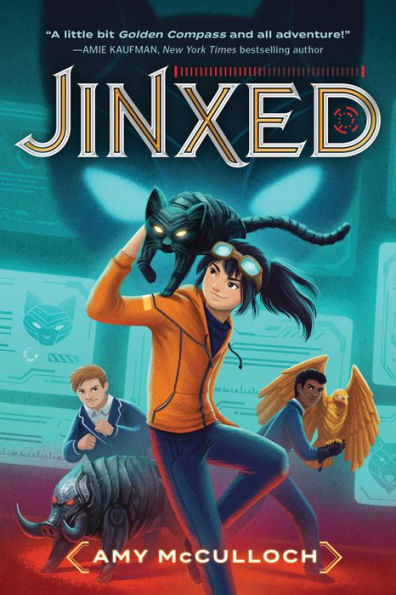 “I want a career that sets my soul on fire, that fans the flames of passion that smolders deep in my belly—that I guard with my focus and intellect. I want a place to unleash that which burns inside me,” Lacey. –Jinxed

Lacey Chu has always dreamed of working as an engineer for MONCHA, the biggest tech firm in the world and the company behind the baku, which is a customizable “pet” with all the capabilities of a smartphone. But when Lacey is rejected by the elite academy that promises that future, she’s crushed.

One night, Lacey comes across the broken form of a highly advanced baku. After Lacey repairs it, the cat-shaped baku she calls Jinx opens its eyes and somehow gets her into her dream school. But Jinx is different than any other baku she’s ever seen. . . he seems real.

As Lacy settles into life at school, competing with the best students in a battle of the bakus that tests her abilities, she learns that Jinx is part of a dangerous secret. Can Lacey hold on to Jinx and her dreams of a future?

Lacey has always been focused on academics, but being successful at Profectus is not going to be easy. When she learns that she has been chosen as part of a baku battling team, Lacey is determined to make friends. Lacey was prepared for Profectus’s academic pressures, but Lacey wasn’t prepared for the challenges of having a baku that has its own opinion and agenda. Lacey soon learns that some of the students will stop at nothing to make it to the top of the class.

Lacey’s world is unique, fascinating, and full of unexpected surprises. Everyone in Lacey’s world depends on their baku, and each baku has the ability to make its owner happy. Whether it’s playing an upbeat song, helping instruct a recipe, or giving directions, each baku is essential for day-to-day life. However, Lacey’s baku, Jinx, is different. He doesn’t follow commands and often leads Lacey into trouble. The interactions between Lacey and Jinx create suspense as well as show Jinx’s unique personality.

Jinxed is an action-packed story that keeps the readers guessing until the very end. Although some of the characters are predictable—the mean kid, the rich cute boy, and the best friend who feels left out—the story never feels cliché. Instead, Lacey’s world gives the reader a realistic view of the future, where everyone is connected to a device 24/7. The end of the story will leave the reader with many unanswered questions, which might frustrate some readers.

Through Lacey’s experiences, the readers will learn important lessons about choosing your own path; it doesn’t matter where you come from, your choices and decisions make you who you are. The message that Jinxed portrays is clear: loving someone doesn’t give you the right to decide what’s best for them.

“I want a career that sets my soul on fire, that fans the flames of passion that smolders deep in my belly—that I guard with my focus and intellect. I want a place to unleash that which burns inside me,” Lacey. –Jinxed