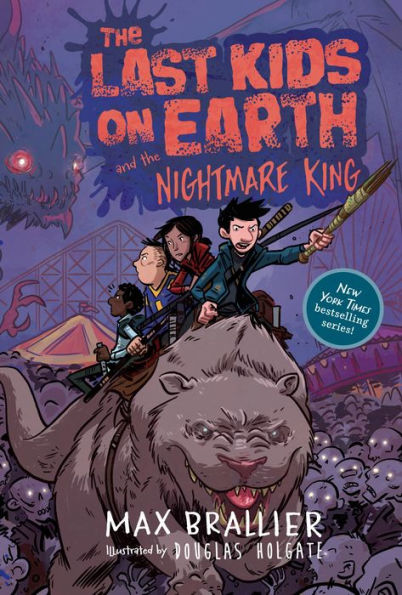 The Last Kids on Earth and the Nightmare King

The Last Kids on Earth #3

Life couldn’t get much better for 13-year-old Jack Sullivan. He eats Twinkie sandwiches for breakfast, lives in a cool treehouse, has a hoard of monster friends, and battles zombies. Jack loves his life with his friends and wouldn’t change a thing about it.

Then Jack and his friends discover they may not be the last kids on earth. When a human voice comes from a radio, everyone except for Jack is excited to discover that others have survived the zombie apocalypse. June and the others hope to be reunited with their parents, but Jack is afraid that finding others will lead to his friends forgetting about him. Jack goes on a quest to prove that their life is crazy, fun, and perfect.

As jack creates crazy fun activities for his friends, a monstrous Nightmare King hunts Jack and his friends.  Jack soon learns that an ancient evil will use any method necessary to gain Jack’s loyalty and help him come into Jack’s world.

The Last Kids on Earth and The Nightmare King is another action-packed book that will keep readers entertained. New complications and new monsters are introduced to keep the plot interesting. The story shows a diverse group of friends who work together to defeat monsters. Although each character may seem stereotypical at first—the brainiac, the bully, the damsel—each character is fully developed and reveal that a person cannot be put into a category. For example, June is not a damsel in distress, but a strong girl who is capable of contributing to the group.

Although there is violence, the kids spend most of their time running from the monsters. The battle scenes contain humor and are not frightening. In the end, the story reminds readers that it often takes both kids and monsters to defeat evil.