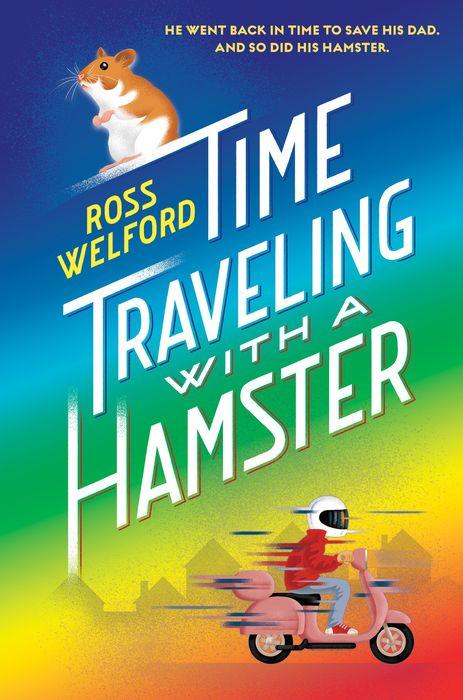 “Don’t dream of a different life, Al. Love the one you’ve got,” Grandpa Byron. –Time Traveling with a Hamster

Time Traveling with a Hamster

On his twelfth birthday, Al Chaudhury receives two gifts: a hamster, and a letter from his dad who died four years ago. The letter points Al to a time machine, an unimpressive-looking zinc-tube-and-laptop contraption in the secret bunker of their old house. It also describes a mind-blowing mission: if Al can travel back to 1984 and stop a go-kart accident involving his dad as a twelve-year-old boy, then maybe he can alter the course of history—and prevent his dad’s death.

As Al soon discovers, whizzing back thirty years requires not only imagination and courage, but also garage break-ins, midnight rides on his grandpa’s mauve scooter, and even setting his school on fire. And through it all, he’s got to keep his hamster safe.

One of the best parts of the book is the relationship between Al and Grandpa Byron, who doesn’t think anyone should try to change time. Grandpa Byron says, “Life, Al, is such a wonderful gift that we should open our minds to every possible moment and cherish the memory of those moments. Because people change. Places change. Everything changes, but our memories do not. Accept life the way it is, Al. That’s the way to be happy.”

Despite Grandpa Byron’s advice, Al goes back in time several times and unintentionally makes his timeline change for the worst. When Al first meets his father, Pye, he is considering setting a cat on fire to prove he is friends with a group of bullies. Instead of being a sympathetic character, Pye is whiny and weak. While the story focuses on the father-son relationship, Al’s relationship with his father is underdeveloped. Instead, Al’s relationship with his grandfather is the central relationship. This relationship adds interest to the story because Grandpa Byron shares his Indian culture and his immigrant story.

Grandpa Byron tells Al, “Don’t dream of a different life, Al. Love the one you’ve got.” Despite this, the conclusion shows Al changing time and saving his father’s life. The conclusion is anticlimactic because after all the craziness of Al’s earlier time-traveling adventures, he ends up saving his father’s life by sending a note back into time. The ending also conflicts with the central theme.

The cover art and the title suggest that Time Traveling with a Hamster will be a fun romp through time. However, the story’s themes — grief, blended families, and bullying — are more suited to older readers. Plus, the advanced vocabulary, the explanation of the theory of relativity, and the workings of time travel may be difficult to understand for some readers. While the story is full of adventure, the complicated plotline is, at times, difficult to follow. However, strong readers who want to explore the serious consequences of time travel will enjoy Time Traveling with a Hamster.

“Don’t dream of a different life, Al. Love the one you’ve got,” Grandpa Byron. –Time Traveling with a Hamster