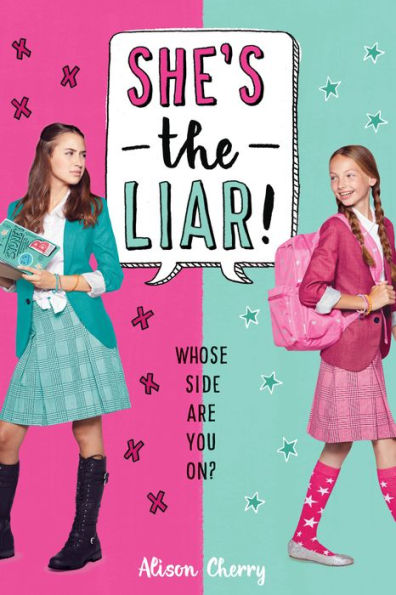 Other books by Alison Cherry

“I’m the big sister. It’s my responsibility to protect Abby, to make sure she doesn’t get hurt, and she’s making it absolutely impossible for me to do that,” Sydney. –She’s the Liar!

When Abby enters sixth grade at her new boarding school, Brookside Academy, she is determined to reinvent herself. She sheds her shy personality and starts playing the part of the confident, bubbly, popular “Abbi.” She quickly learns about the Committee, an all-powerful student organization that controls nearly every aspect of extracurricular life. Whatever you do, you don’t want to be on the Committee’s bad side.

Abby’s older sister, Sydney, is in eighth grade at Brookside. At home, she was always a loner, so Abby is shocked to discover that Sydney has also crafted herself into a new person at school—she’s the president of the Committee and rules the entire student body through intimidation.

Each sister is a threat to the success of the other’s new personality, and things get heated as Abby and Sydney try to outmaneuver each other for power and influence. Both girls have hidden motives, and they soon find themselves hopelessly tangled in a web of lies, schemes, and blackmail.

She’s the Liar! uses the backdrop of a boarding school to highlight the fact that every story has two sides. The first half of the book is told from Abby’s point of view. In the past, Abby allowed one embarrassing moment to define her. Now that she’s at a new school, Abby decides to reinvent herself. Instead of avoiding people, Abby is going to be outgoing, join clubs, and make friends. Soon, Abby is able to overcome her fears and she realizes, “The old me would’ve been totally terrified that if anyone knew my secrets, nobody would like me. But then you told me that I had to own my failures and my success, because they’re all part of me.”

The second part of the book is told from Sydney’s point of view. At the beginning of the book, Sydney’s actions seem villainous and cruel. Adding Sydney’s point of view allows readers to understand her actions, which are largely based on insecurity. Even though it is clear that the reader is supposed to sympathize with Sydney, why she blackmails people instead of befriending them is never mentioned. The ending is a little too sweet and unrealistic; however, even Sydney learns the importance of taking ownership of her past deeds.

Middle school readers will relate to Abby’s fears and uncertainty, and they will cheer for her when she takes steps towards being a better person. Even though there are some holes in the plot, younger readers will still enjoy the story, which showcases student government and sister relationships. Even though the story focuses on Abby and Sydney, the other characters in the book have different interests: astronomy, theater, dance, and even playing Dungeons and Dragons. The other characters add interest and show that people’s differences should be celebrated. She’s the Liar! is an entertaining story that teaches that no one should feel embarrassed about their past.

Other books by Alison Cherry

“I’m the big sister. It’s my responsibility to protect Abby, to make sure she doesn’t get hurt, and she’s making it absolutely impossible for me to do that,” Sydney. –She’s the Liar!