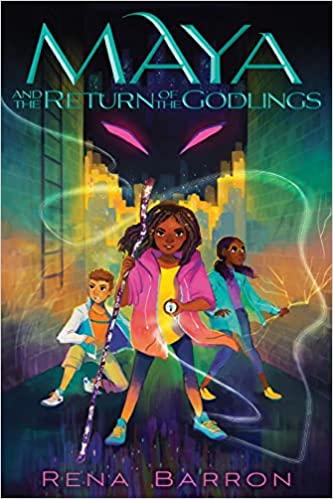 “It was easy for the orisha council to make calls on our lives from their celestial thrones. Meanwhile, the whole world was falling apart,” Maya. –Maya and the Return of the Godlings

Maya and the Return of the Godlings

Training to be a guardian of the veil isn’t easy, but 12-year-old Maya is determined to follow in her father’s footsteps, especially since he hasn’t been the same since their last run-in with the Lord of Shadows, the evil being who controls the Dark. On the brink of an upcoming war between Earth and the Dark, the Lord of Shadows snatches Papa’s soul.  Maya rounds up her friends, fellow “godlings,” Frankie and Eli, for another journey into the Dark to retrieve Papa’s soul and stop the veil from collapsing.

Once back in the Lord of Shadows’ domain, Maya is faced with difficult moral choices. She finds an imprisoned Darkbringer, named Zeran, who doesn’t want a war with the human realm. For the first time, she considers that not all Darkbringers are evil, which makes it harder to fight them since most have been recruited into the Lord of Shadows’ ranks by force. Allied together, Maya, Frankie, Eli, and Zeran continue to the Crystal Palace, the Lord of Shadows’ lair.

Maya’s character is both funny and thoughtful, as she has a penchant for disobeying orders but for the right reasons—she will always save her friends and family even if the world is against her. Her determination to keep people safe is admirable. However, the friends have repeated setbacks because random creatures attack them. These scenes get tiring since they do not add to the plot.

Despite this, Maya and the Return of the Godlings is an interesting read that takes time to develop the characters such as Zeran, a darkbringer rebel. Zeran’s character is interesting because he forces Maya to change her perspective. At first, Maya perceived him to be the enemy, but now she feels a duty to protect him. This is what makes the plot most worth reading: Maya’s unwavering determination to make the world safe for all who wish to do good.

The story has a sense of unpredictability because the plot does not stray away from mentioning the death of past characters, such as Papa’s first family. Plus, the situation in Maya’s world continues to grow in gravity, making it increasingly likely that her friends and family won’t escape unscathed. With a war brewing, Maya and the Return of the Godlings explores dark topics.

Readers who enjoy books with magical worlds and rich cultural ties should also read Amari and the Night Brothers by B.B. Alston and Aru Shah and the End of Time by Roshani Chokshi.