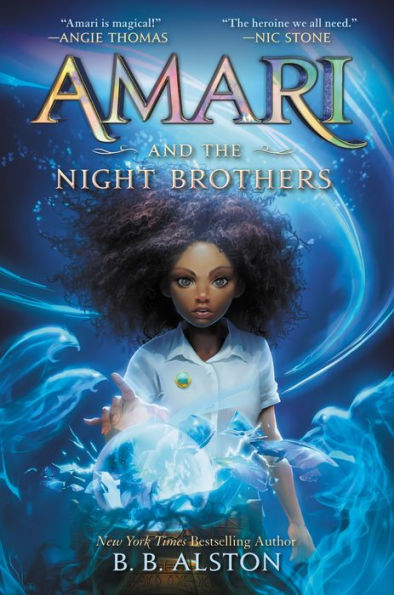 “People assume stuff about you based on things you can’t change about yourself. So I just do my best to prove them wrong, to be the person they’re not expecting. Amari Peters, changing minds one person at a time,” Amari. –Amari and the Night Brothers

Amari Peters’ brother Quinton is missing. Without tax records or a single piece of evidence to use, authorities look at the Peters’ family address in the Rosewood low-income housing projects and prematurely chalk the disappearance up to “illegal activities.” Then, Amari gets into a fight with bullies at her school. This leaves Amari without a scholarship and without a sense of belonging, but a ticking briefcase in Quinton’s bedroom closet quickly instills tangible hope that Quinton will return. The briefcase leads Amari to the Bureau of Supernatural Affairs, a secretive organization tasked with hiding all the magicians, fairies, and supernatural creatures of the world. When Amari joins the organization, she again feels like she doesn’t belong among classmates who already have extensive knowledge of magic. Even more intimidating is the fear and bias that her classmates hold towards Amari’s supernaturally enhanced talent—an ability for magic that has commonly been deemed evil in the supernatural world. Will she find friendships here in this other world, or will she again be judged and half-seen?

It is only through battling bullies, outsmarting Junior Agent Tryouts, and overcoming powerful magicians that Amari can find her brother Quinton and regain confidence in her uniquely beautiful power. Even in the midst of facing all of these obstacles, Amari is eventually able to say proudly, “I’m not the girl who gives up. I’m the girl who tries. The girl who fights. The girl who believes. My eyes open with a burning realization. I’m unstoppable.”

Amari and The Night Brothers follows Amari’s entertaining, witty, and strong perspective as she contemplates what it means to belong in a community that continually sets out to ostracize her. While the plot is an action-packed, engrossing story of every magical creature you have ever heard of (from magicians to mermaids, to golden lions and Bigfoot), this intricate plot also works to explore issues of race and class discrimination. In defining Amari’s supernatural power of being a “magician” as illegal and dangerous, this story aims at bringing to light the way that prejudices act to divide our society, as well as how we can aim to overturn them. The result is an empowering and wonderful story of power, love, friendship, and the ability to overcome.

Throughout its narrative, Amari and the Night Brothers addresses issues of racism, classism, and prejudice in an easily digestible ways for young readers. Additionally, this book presents captivating scenes and vivid settings which weave together to create a tangible fantasy world filled with every type of supernatural creature that an imaginative kid could hope for. Dragons, vampires, magical forests, and funny dialogue all paint a narrative that stays action-packed, captivating, and evocative until the end. The story ends in a moment of triumph and reaffirmed empowerment for Amari, while also leaving things open for the potential of a sequel. Amari and the Night Brothers is the perfect book for any elementary to junior high fantasy and action fanatic who is searching for a meaningful and magical story.

“People assume stuff about you based on things you can’t change about yourself. So I just do my best to prove them wrong, to be the person they’re not expecting. Amari Peters, changing minds one person at a time,” Amari. –Amari and the Night Brothers