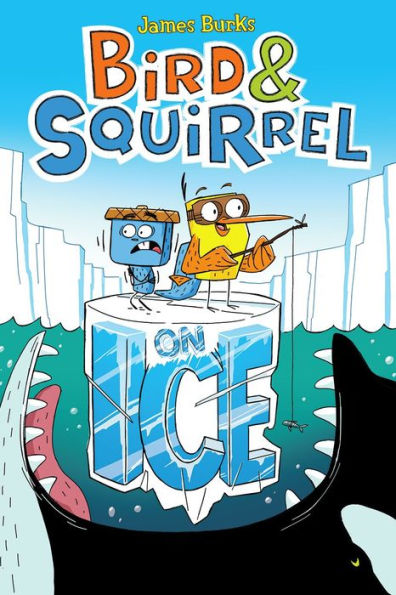 “You were right. I should never have put the life of a single bird above the prosperity of the entire village,” Sakari. –Bird & Squirrel On Ice

After Bird and Squirrel crash land in the South Pole during a raging blizzard, a penguin named Sakari thinks Bird has come to rid her village of a hungry Killer Whale. But when Squirrel finds out that Bird will actually be fed to the Killer Whale as a sacrifice, they hatch a crazy plan to escape. With good timing, a little luck, and help from Sakari, they just might make it out alive. Or they might end up as whale food!

Bird & Squirrel on the Run consisted of funny cat chases and misfortunes. While Bird & Squirrel On Ice has more of a storyline, there is less interaction between Bird and Squirrel. For much of the story, Squirrel is trying to save Bird’s life, while Bird is clueless, convinced that Squirrel is just jealous. The storyline has a darker tone and revolves around Bird being sacrificed to a whale.

The story’s serious tone is offset by the funny chases and the introduction of Sakari’s penguin family. Sakari and her father disagree about sacrificing Bird; in the end, Sakari proves that she has a “mighty spirit and an even mightier heart.” Many readers will enjoy seeing a female character save the day. Because of Sakari’s determination to listen to her heart and Squirrel’s dedication to his friend, Bird is saved in the end.

Interesting characters, slapstick humor, puns, and a fast-paced plot combine to create an entertaining graphic novel. The story is illustrated with brightly colored panels. Much like a cartoon, the illustrations use exaggerated facial expressions to add to the humor. Each page contains one to six simple sentences. Bird & Squirrel On Ice will appeal to even the most reluctant readers. Bird and Squirrel’s silly antics will keep readers interested while they explore family dynamics and jealousy.

“You were right. I should never have put the life of a single bird above the prosperity of the entire village,” Sakari. –Bird & Squirrel On Ice