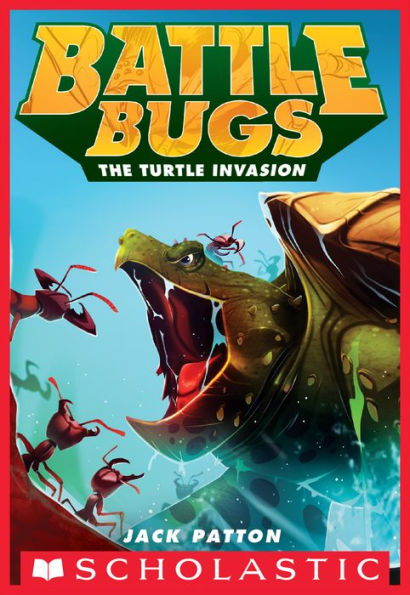 Other books by Jack Patton

“I might not be a bug, but I’ve learned some of their tricks!” Max. —The Turtle Invasion

Max receives an urgent message. The Battle Bugs need his help. An old enemy has returned and this time the enemy has vowed to destroy every bug. An epic fight is about to begin, and only Max can save the day.

For those who have read the previous Battle Bug books, the appearance of General Komodo brings suspense. The Turtle Invasion brings the gecko and bullet ants into focus and readers will learn interesting facts about each species. The bug (and human) characters are not developed as well as they were in the previous books; however, seeing a human through a bug’s eye gives the story interest. The fighting between lizards and bugs adds suspense with kid-friendly descriptions.

The plot of The Turtle Invasion has the same structure as previous books. The bugs need help. Max appears. Max is almost eaten by a creature. Max survives and is the only one who can save the Battle Bugs. Although younger readers might not mind the repetitious plot, some may find the story less enjoyable.

Readers should read earlier books in the Battle Bugs series because many of the characters were developed in previous books. Even though The Turtle Invasion has some longer, descriptive paragraphs, the text is easy to read. Dialogue, Max’s thoughts, onomatopoeia, and full-page illustrations help keep readers engaged.

Other books by Jack Patton

“I might not be a bug, but I’ve learned some of their tricks!” Max. —The Turtle Invasion