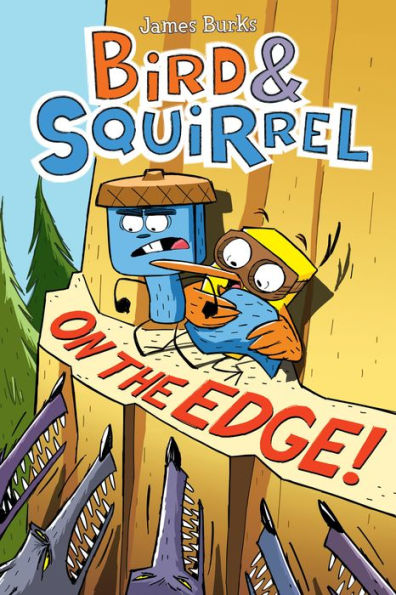 “Death by dust? You really are afraid of everything,” Bird. –Bird & Squirrel On The Edge

Bird & Squirrel On The Edge

Bird and Squirrel are heading home, but first they have to cross the Great Mountains. Along the way, the two friends run across a baby bear that is being chased by wolves. Bird jumps in to help the bear. During the chase, Bird gets hit in the head with an acorn and gets amnesia. Now Squirrel has to be the brave one in order to keep both Bird and the bear cub safe as they travel over the mountains. With a pack of hungry wolves chasing them, can Squirrel step up and be the leader they need to keep them alive?

Bird’s and Squirrel’s role reversals lead to laugh after laugh. Even though Squirrel is reluctant to help the baby bear, in the end, Bird convinces him to do what’s right. When the two friends switch roles, Squirrel takes several risks to keep his friends safe. The cute bear gives the story a fun new twist. Through it all, Squirrel learns that helping others is always the right thing to do.

With funny puns, wild chase scenes, and friendship, Bird & Squirrel on the Edge will take readers on an amazing adventure through the Great Mountains. Although the story’s plot consists mostly of chase scenes, readers will enjoy the interplay between Bird, Squirrel, and the bear. The perfect ending will have readers smiling from ear to ear.

Even though Bird & Squirrel on the Edge is the third installment of the series, readers do not have to read the books in order. However, Bird’s and Squirrel’s developing friendship is one of the best parts of the series, so readers will get the most enjoyment if the books are read in order. Bird’s and Squirrel’s adventures aren’t over when they make it home. Once they are back on their home turf, they discover a new danger that threatens the forest. Readers will be eager to pick up the next book in the series, Bird & Squirrel On Fire.

“Death by dust? You really are afraid of everything,” Bird. –Bird & Squirrel On The Edge