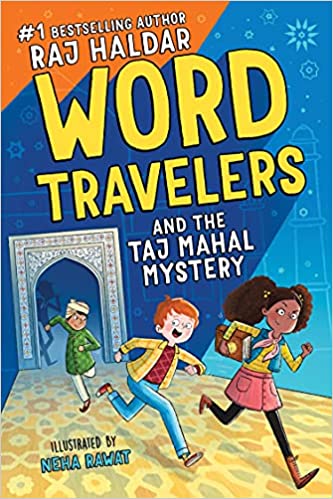 Eddie and Molly-Jean (MJ) are next door neighbors and best friends. One Saturday, Eddie’s mom sends him up to the attic to get his great-grandpa’s most prized possession (a book, of course). Eddie and MJ are suddenly transported to India where they must use their word knowledge to solve a mystery and help a new friend save his school.

From an educational standpoint, Word Travelers is an excellent book to use as an introduction to new words, because there are many words defined throughout the story. Each word is shown in bold text and there is a glossary at the end of the book. The vocabulary lessons are mostly integrated into the story. For example, when discussing shampoo, Dev looks up the word and reads “shampoo comes from Hindi. That’s one of the many languages we speak in India.” The readers are also told that “the Hindi word champo originally meant to press or rub, like during a massage. Over time, the word was adopted into English to describe the way we rub our hair when we wash it.” A new word appears every one to five pages, which may be overwhelming for some readers.

Some readers may be bothered by the unrealistic events. For example, when Eddie and MJ travel to India, they appear in a bedroom. A boy named Dev finds them and instead of acting suspicious of the two strangers, he immediately begins telling them about his problem. Later in the story, Eddie, MJ, and Dev hurry to “board the last dinghy to Sea Palace.” But once they get there, they row the dingy to the palace themselves, which makes no sense. Not only that, but at one point MJ rows the dingy by herself while the two boys sleep. There are several more events that may leave readers scratching their heads.

Word Travelers has diverse characters who work together to solve a mystery. However, most of the problem-solving comes from a magical book titled Awesome Enchanted Book and takes little effort on the kids’ part. Still, young readers will enjoy the black and white illustrations that appear on almost every page. Plus, the illustrations help readers visualize the story’s events. When the villain appears for the first time, his stereotypical appearance makes it clear that he is the bad guy. Even though there is a clear villain, he is never scary, but instead adds suspense to the story.

Most young readers will not be able to read Word Travelers on their own. The book is written at a 5.9 reading level, which is higher than most young adult books’ reading level. Readers will need help pronouncing and understanding many of the words that are being introduced. However, Word Travelers is worth reading and discussing with a child because of its educational value. One positive aspect of the book is that occasionally MJ talks about historical people that she admires, such as Mae Jemison, the first Black female astronaut. This may spark readers’ interest in learning more about these historical people. If you’d like a book that teaches about vocabulary but is more accessible to younger readers, The Word Collector by Peter H. Reynolds and the Polly Diamond Book Series by Alice Kuipers & Diana Toledano would be good choices.